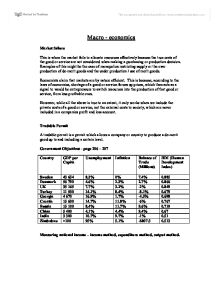 In recession, the government will inject money into the circular flow by lowering taxes (income tax and sales tax) and / or raising government spending Monetarists - monetary policy This is the control of the economy through interest rates and the money supply. In times of recession, the government should lower interest rates and in times of excessive inflation they will lower the money supply and raise interest rates. E.g. - the average UK person earns $ 45 000 a year giving them an after tax wage, per month of $3100. The average house costs $ 230 000 meaning a mortgage of approximately $ 170 000. Monthly payments at 5%, therefore, are $900 leaving a total disposable income of $2200. If, however, the government reduces interest rates to 2.5% then monthly mortgage payments become $450, giving every household an extra $450 a month to spend. Between 1960 and 2009, governments throughout the world abandoned fiscal policy (Keynesianism) and just controlled the economy through interest rates (monetarism). Supply side theorists Supply side economists (laissez faire economists) believe that governments should not intervene in the economy as governments cannot control AD in the long run as the markets are self-correcting. Strengths and weaknesses of these policies The biggest strength of supply side policies are that they provide real growth in GDP / National income. Ultimately, rises in AD are limited in their effectiveness because they can only push GDP up to the PPF. In the long run, only by shifts in AS will the economy improve. E.g. Fiscal measures might make an unemployed person work. Their output leads to a rise in GDP. However, in the long run, further rises in GDP can only be sustained by increasing the productivity of that worker either by retraining or improving the technology that he or she has to work with. Secondly, rises in GDP through shifts in AS do not increase inflation pressure. ...read more.

Multiple-choice questions Macro - economics work General Revision Taxes (Progressive v Regressive) All governments need to tax their citizens to pay for infrastructure projects, welfare payments and transfer payments (civil service wages). The question is, which type of tax system is best, America's regressive system or Sweden's progressive system? Progressive tax system Regressive tax system Sweden Germany UK America Turkey India / Russia France Australia What are progressive taxes? A progressive tax is a tax where the rich pay a higher % of their income than the poor eg income tax, luxury taxes, property taxes, corporation tax (tax on company profits) Regressive taxes Regressive taxes are taxes where the poor pay a higher % of their income than the rich e.g sales tax, flat rate tax on property for example, SSK. A profile of two people, one rich, the other poor Mehmet is a CEO and he earns, every month $50 000. By contrast, Alan is an unemployed lay about, earning $500 a month. In country A the top rate of tax is 50% with sales tax of 10%. Mehmet pays a much higher rate of tax than Alan, which is fairer. Country B has a top tax rate of 20% and sales tax of 20%. This time, both Alan and Mehmet pay roughly 20% of their income in tax. This is a much less fair system but at least Mehmet is now discouraged from his plan to live in Dubai to avoid taxes. Income inequality This is measured by the gini co-efficient Laffer Curve Tax rate Tax revenue collected Lorenz Curve % of the wealth owned A B poorest % of population Gini co efficient is calculated by A / (A + B) Communist Utopia (red) Alanopia (purple) (corrupt African dictatorship) Mehmetopia (western European country) Therefore, our gini co-efficient in our communist utopia = 1 In Alanopia the gini co-efficient is very low ie 0.1 - 0.2 the poorest 50% earn just 5% of the wealth (5 / 50) By contrast, in Mehmetopia the gini co- efficient is 0.5 meaning that the bottom 50% own 25% of the wealth (25 / 50) ...read more.