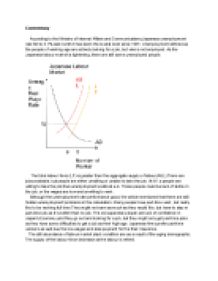 Transfer-Encoding: chunked ﻿Commentary According to the Ministry of Internal Affairs and Communications,Japanese unemployment rate fell to 3.1% last month.It has been the lowest level since 1991. Unemployment defined as the people of working age are actively looking for a job, but who is not employed. As the Japanese labour market is tightening, there are still some unemployed people. The total labour force (LF) is greater than the aggregate supply of labour(ASL).There are jobs available, but people are either unwilling or unable to take the job. At W, a people are willing to take the job,thus unemployment exists at a-b. Those people could be lack of skills on the job, or the wages are low and unwilling to work. Although the unemployment rate performance good, the article mentioned that there are still hidden unemployment problems in the calculation. ...read more.

This cause deflation and Japan has been suffering from it for a long time. The data released last week showed Japan's core CPI fell by 0.5%. The aggregate demand decrease and shift to the left from AD to AD?, in case the average price level drop down from P to P? , the deflation gap exists between the LRAS to Q?. This cause a deflationary trap in Japan, the decreasing prices leading to decreasing AD as the money gain value and people would rather delay their purchase as they could buy more later. This again turns into decreasing prices and this vicious circle is difficult to break. Abenomics is the economic policies that advocated by Abe since 2012, it is based on fiscal stimulus, monetary easy and structural reform. ...read more.

However, these policies do not seem very effective as the households may prefer to save and postpone spending during the deflation, and the real wages were remain the same.The government intervention?s effectiveness is decreasing, I think the Japanese government could reduce their interventionist policies. In the long run, the economy could automatically adjust itself. As AD is lower than the LRAS, the deflationary gap occurs. The aggregate demand decrease, the price level and cost of production is decreasing. The wage might decrease and other raw material might be cheaper. The firms could produce more at a lower price level. The SRAS shift to the right to SRAS?, the price level lower from the P to P?, and the economy back to the unemployment level from Y1 to Y. Even though the wage is sticky downward, firms could lower the wages for the reason of deflation.Eventually, the economy will back to the LRAS level. ...read more.