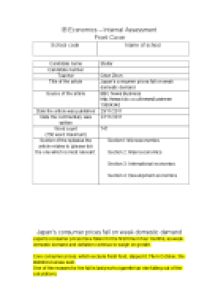 ﻿IB Economics ? Internal Assessment Front Cover School code Name of school Candidate name Stellar Candidate number Teacher Chen Zhen Title of the article Japan's consumer prices fall on weak domestic demand Source of the article BBC News Business http://www.bbc.co.uk/news/business-15884340 Date the article was published 25/11/2011 Date the commentary was written 27/11/2011 Word count (750 word maximum) 747 Section of the syllabus the article relates to (please tick the one which is most relevant. Section1: Microeconomics Section 2: Macroeconomics Section 3: International economics Section 4: Development economics Japan's consumer prices fall on weak domestic demand Japan's consumer prices have fallen for the first time in four months, as weak domestic demand and deflation continue to weigh on growth. Core consumer prices, which exclude fresh food, slipped 0.1% in October, the statistics bureau said. One of the reasons for the fall is last year's cigarette tax rise falling out of the calculations. The strong yen as well as Europe's debt crisis are hurting the growth outlook for the world's third-largest economy. Yen strength In March, Japan was hit by a devastating earthquake and tsunami that caused much damage in the north-east of the country. ...read more.

Cigarette tax depressed the activity of market and placed a wedge. Producers gained less profit and consumers paid more. Hence the total quantity reduced from Q1 to Q2, as figure shown below. Tax charged on producers equilibrium without rising tax The increases in price that consumers paid reduced the willingness to buy. The demand curve shifted to left from D to D1 as figure shown below. Hence the quantity demanded reduced from Q2 to Q3 and price of cigarette reduced from P2 to P4. Tax affects demand indirectly Less quantity demanded of cigarette means less quantity sold at the price lower than without tax. Therefore even lower government revenue collected. What have discussed above would repeat itself as a cycle if Japan government continues to rising cigarette tax. The results of higher cigarette tax combined with several other factors together to reduce the aggregate demand in Japan market. The economy was near full employment level of output, with a small amount of spare capacity. The figure below indicated that as aggregate demand curve shifted to left, the quantity of output and average price level reduced. ...read more.

If value of exchange rate is high, then export industries find it is difficult to sell products because foreigners are likely to reduce the quantity imported since goods become more expensive. Therefore, lower the revenue from exports, slower the pace of recovery. The fell of average price level (deflation) can also be explained by the high exchange rate. When value of exchange rate is high, price of imports will be relatively low. Taken import of oil as an example, the gasoline prices have dropped 1% since September. In addition, price of imported raw materials will reduce the costs of production for firms which could lead to lower prices for consumers. Low price of imported goods also puts pressure on domestic producers to be competitive by keeping prices low. Japan?s government could lower the value of yen by means of buy foreign currencies on foreign exchange markets. Government uses its own yen to buy hence increases supply of yen on foreign exchange market and so lowers its exchange rate. Lower the level of domestic interest rates could lower the value of yen too. This will cause financial investment abroad more attractive. In order to invest abroad, investors will buy foreign currency thus exchanging their own currency and increasing supply of it on financial exchange market. This could lower its exchange rate. ...read more.