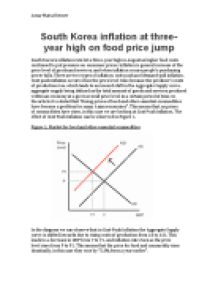 ﻿Anna-Maria Riemer South Korea inflation at three-year high on food price jump South Korea?s inflation rate hit a three-year high in August as higher food costs continued to put pressure on consumer prices. Inflation is general increase of the price level of goods and services, and when inflation occurs people?s purchasing power falls. There are two types of inflation: cost-push and demand-pull inflation. Cost-push inflation occurs when the price level rises because the producer?s costs of production rise, which leads to an inward shift in the Aggregate Supply curve, aggregate supply being defined as the total amount of goods and services produced within an economy at a given overall price level in a certain period of time. In the article it is stated that ?Rising prices of food and other essential commodities have become a problem for many Asian economies?. This means that, as prices of commodities have risen, in this case we are looking at Cost Push Inflation. The effect of Cost Push Inflation can be observed in Figure 1. ...read more.

This can be explained by the fact that even though raising interest rates lowers inflation it worsens the economic growth of a country, as we can see in the Figure 2 below: Figure 2: Effect of increased interest rates on Korean economy We can clearly see why the Bank of Korea does not want to increase interest rates again. It will push Aggregate Demand inward even further, from AD to AD1, which will improve the inflation by lowering it from P to P1, but cause economical problems, since GDP decreases from X to X1. And so Korean authorities struggle, because they want to lower inflation, but also they want to ? boost domestic demand?. Therefore, it is unlikely that the bank of Korea will ?exercise monetary policy at the risk of further slowdown?. Another policy that the government could use is the Fiscal Policy. Its tools are taxation and government spending. If the government needs to lower inflation, they could increase taxes or decrease government spending, which would shift the aggregate demand curve inwards and thus reduce Price Level. ...read more.

This would have the positive effect illustrated in Figure 4. Figure 4: Effect of subsidy on food or essential commodities market: On this diagram we can observe that if the government would use a supply side policy and for example grant subsidies to Korean food and commodity producers, the aggregate supply curve would shift outward form AS to AS1, which would lower the price level from P to P1, but at the same time economic growth keeps occurring, as X moves to X1. Therefore, it would be highly suggestible for the Korean government to subsidize those firms who produce the goods whose prices have been rising. Another way to shift the aggregate supply curve outward would be by allowing them a tax reduction, which would have the same positive effect on the economy. In conclusion, as “fighting rising prices is one of their (Korean government’s) top priorities” they should stop concentrating on the monetary policy and instead use the Supply Side Policy, which will not only lower inflation but also serve economic growth. Word Count: 1023 ï ï ï ...read more.