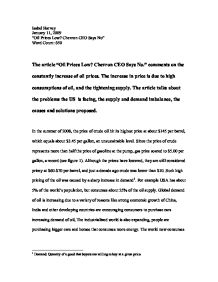 Isabel Harvey January 11, 2009 "Oil Prices Low? Chevron CEO Says No" Word Count: 650 The article "Oil Prices Low? Chevron CEO Says No." comments on the constantly increase of oil prices. The increase in price is due to high consumptions of oil, and the tightening supply. The article talks about the problems the US is facing, the supply and demand imbalance, the causes and solutions proposed. In the summer of 2008, the price of crude oil hit its highest price at about $145 per barrel, which equals about $3.45 per gallon, an unsustainable level. Since the price of crude represents more than half the price of gasoline at the pump, gas price soared to $5.00 per gallon, a record (see figure 1). Although the prices have lowered, they are still considered pricey at $60-$70 per barrel, and just a decade ago crude was lower than $10. ...read more.

In addition, the weak dollar has added economic pressure on crude oil prices, crude commodity is traded in dollars on the world wide market3. These record high gas prices sent a signal to the market that the demand needed to slow down, and it did slow down dramatically (see figure 3). People started to cut down on traveling to balance their budget, they changed their purchasing habits moving away from SUVs and buying smaller and energy saving cars like hybrids. The developing economies were affected by the global economic crisis, slowing down their expansion. As a result demand and supply reached equilibrium4 and crude prices came down. O'Reilly warned that although the short term problems have been solved by decreasing demand, a long term energy policy will be needed. Newly elected President Obama will need to work on two things: the first would be energy efficiency and continue to point out to the American ...read more.

of oil per day At summer 2008 $145 per barrel $12 billion a day to fuel the world At today's price of $42 per barrel $3.6 billion a day to fuel the world Figure 3 Supply and demand of crude oil and effect on commodity prices "...record high gas prices sent a signal to the market that the demand needed to slow down, and it did...the prices came down..." 1 Demand: Quantity of a good that buyers are willing to buy at a given price. 2 Supply-Ability of producers to produce a quantity of a good at a given price. 3 Market-The group of consumers or organizations that is interested in the product, has the resources to purchase the product, and is permitted by law and other regulations to acquire the product. 4 Equilibrium-A balance between amount supplied and amount demand, when the two curves intersect, at Pe, equilibrium price. ?? ?? ?? ?? ...read more.