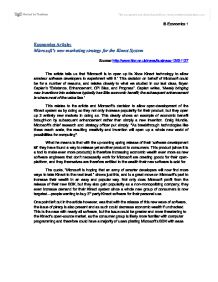 Economics Article: Microsoft's new marketing strategy for the Kinect System Source: http://www.bbc.co.uk/news/business-12531127 The article tells us that 'Microsoft is to open up its Xbox Kinect technology to allow amateur software developers to experiment with it.' This decision on behalf of Microsoft could be for a number of reasons, and relates closely to what we studied in our last class, Bryan Caplan's "Existence, Enhancement, CPI Bias, and Progress". Caplan writes, 'Merely bringing new inventions into existence typically has little economic benefit; the subsequent enhancement is where most of the value lies.' This relates to the article and Microsoft's decision to allow open-development of the Kinect system as by doing so they not only increase popularity for their product, but they open up 2 entirely new markets in doing so. ...read more.

The quote, "Microsoft is hoping that an army of smarter developers will now find more ways to take Kinect to the next level." shows just this, and is a great move on Microsoft's part to increase their wealth in an easy and popular way. Not only does Microsoft profit from the release of their new SDK, but they also gain popularity as a non-monopolizing company; they even increase demand for their Kinect system since a whole new group of consumers is now targeted-people wanting to buy 3rd party Kinect software for their personal use. One point left out in the article however, was that with the release of this new wave of software, the issue of piracy is also present and as such could decrease economic wealth if unchecked. ...read more.

Kinect, which turns the player's body into a game controller, has been a big hit since it launched last November. It has already captured the imagination of the hacker community, which has been demonstrating various uses for the technology, including 3D photography. Microsoft is hoping that an army of smarter developers will now find more ways to take Kinect to the next level. "As breakthrough technologies like these reach scale, the resulting creativity and invention will open up a whole new world of possibilities for computing," said Craig Mundie, Microsoft's chief research and strategy officer. The announcement was made during an open day at Microsoft's research centre near Seattle. The company is hoping that the success of Kinect, developed by its own scientists, can give it a greater presence in the home entertainment field. ?? ?? ?? ?? IB Economics 1 ...read more.