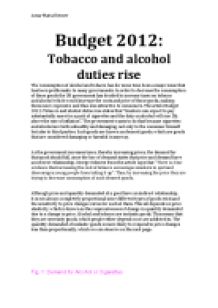 Mircoeconomics Analysis of the Budget 2012: Tobacco and alcohol duties rise.

﻿Anna-Maria Riemer Budget 2012: Tobacco and alcohol duties rise The consumption of alcohol and tobacco has for some time been a major issue that has been problematic to many governments. In order to decrease the consumption of these goods the UK government has decided to increase taxes on tobacco and alcohol which would increase the costs and price of those goods, making them more expensive and thus less attractive to consumers. The article Budget 2012: Tobacco and alcohol duties rise states that ?Smokers can expect to pay substantially more for a pack of cigarettes and the duty on alcohol will rise 2% above the rate of inflation?. The government wants to do that because cigarettes and alcohol are both unhealthy and damaging, not only to the consumer himself but also to third parties. Such goods are known as demerit goods, which are goods that are considered damaging or harmful in anyway. As the government increases taxes, thereby increasing prices, the demand for that good should fall, since the law of demand states that price and demand have an inverse relationship. ...read more.

This shift in supply leads to an increase in price from P to P1, and, the good having inelastic demand, a decrease in quantity demanded less than proportionally from Q to Q1. This allows governments to tax such goods very heavily, and get a lot of revenue from it, but still the quantity demanded does not fall by too much. In the case of cigarettes and alcohol this is a problem, since even though prices rise people still keep consuming it, due to addiction. Therefore, government taxations are not really working for these goods, and they should consider other options such as banning of this products or negative advertising. Nevertheless, in this particular case, the article states that the major increase in prices ?5 % above inflation for tobacco? has lead to a decrease in. The Chancellor George Osborne said that "There is clear evidence that increasing the cost of tobacco encourages smokers to quit and discourages young people from taking it up," and also pub chains complain that they now have less people buying alcohol, since the price has so drastically increased and ?the British people are now paying 40% of all the alcohol duties in Europe?. ...read more.

In this case, they would be able to this by focusing more on aggressive advertising campaigns, highlighting the dangers of excessive cigarette and alcohol consumption. The advertising should raise awareness and therefore reduce demand, which would result in the MPB moving towards the MSB. This would ensure the consumption of cigarettes will reach the Socially Optimal Point, where the Marginal Social Cost equals the Marginal Social Benefit (MSC=MSB). This is a positive effect, since at this point social economic welfare is maximized. In conclusion, even though it is difficult to fully stop consumption of demerit goods such as alcohol and tobacco, the article shows that a major increase in taxes makes it possible to reduce it. However, as illustrated in the diagrams, no matter by how much the government increases taxes consumption of alcohol and cigarettes will fall less than proportionally, since they are inelastic goods. Also, if they keep rising the taxes an increase in black market activity might occur. Therefore, the government should approach different measures to reduce the consumption of said goods. For example, they could use tax revenue for heavy negative advertising and education to scare people away from consuming these products. ...read more.