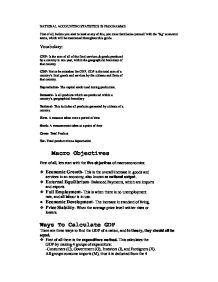 NATIONAL ACCOUNTING STATISTICS IB PROGRAMME First of all, before you start to look at any of this, you must familiarise yourself with the 'big' economic terms, which will be mentioned throughout this guide. Vocabulary: GNP- Is the sum of all of the final services & goods produced by a country in one year, within the geographical boundary of that country. GDP- Not to be mistaken for GNP, GDP is the total sum of a country's final goods and services by the citizens and firms of that country. Depreciation- The capital stock used during production. Domestic- Is all products which are produced within a country's geographical boundary National- This includes all products generated by citizens of a country. Flow- A measure taken over a period of time Stock- A measurement taken at a point of time Gross- Total Product Net- Total product minus depreciation Macro Objectives First of all, lets start with the five objectives of macroeconomics: * Economic Growth- This is the overall increase in goods and services in an economy, also known as national output. ...read more.

For example if there was an alcoholic beverage and milk, which had the same factor cost, the alcoholic beverage would be taxed, and the milk would be subsidised, thus making a market price. But in the end, the more accurate result will be the factor cost, because in every country taxes and subsidies differ. Nominal Vs. Real National Income The difference between Nominal National Income (NNI) and Real National Income (RNI) is that the NNI shows the National Income at current prices, whilst RNI shows the National Income which is adjusted, and subtracts the inflation. The RNI is more accurate as it corrects inflation. Total Vs. Per Capita Income The difference between Total Income (TI) and Per Capita Income (PCI) is that TI is the total income of the country, and PCI it shows on average the income of a citizen of a country. PCI is more accurate, as it shows the wealth of a nation. ...read more.