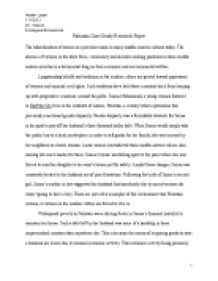 ﻿Austin Lazar 11/12/12 Dr. Vidovic Ecological Economics Pakistan Case Study Research Paper The subordination of women is a prevalent issue in many middle-eastern cultures today. The absence of women in the labor force, community and decision making positions in these middle eastern societies is a detrimental drag on their economic and environmental welfare. Longstanding beliefs and traditions in the muslim culture are geared toward oppression of women and minimal civil rights. Such traditions have held these countries back from keeping up with progressive countries around the globe. Saima Muhammad, a young woman featured in Half the Sky lives in the outskirts of Lahore, Pakistan, a country which epitomizes this previously mentioned gender disparity. Gender disparity was a formidable obstacle for Saima in her goal to pay off her husband?s three thousand dollar debt. When Saima would simply take the public bus to a local marketplace in order to sell goods for her family, she was scorned by her neighbors as a loose woman. Loose women contradicted these middle-eastern values, also making life much harder for them. Saima?s house was falling apart to the point where she was forced to send her daughter to her aunt?s house just for safety. Amidst these changes, Saima was constantly beaten by her husband out of pure frustration. Following the birth of Saima?s second girl, Saima?s mother-in-law suggested her husband find somebody else to marry because she wasn?t going to have a boy. ...read more.

The dominance of men in all decision-making positions includes the allocation of natural resources. Women have shown through their agricultural work that they are capable of caring for crops and the environment in a sustainable fashion but they aren?t given the opportunity. The methods of which the men of pakistan have decided are appropriate for their country include overgrazing. With a cow population that is higher than that of its people, resources are diminished through this exploitation. When there is drought along with over-exploitation, it results in poverty. Poverty in turn leads to overexploitation which worsens the problem of desertification, It is a vicious cycle. (Voice of America News) This environmental exploitation is arguably a result of the dominance of men throughout decision-making positions, and the lack of interactive opportunities given to women. Women?s roles in the awareness and education of environmental dangers throughout Pakistan are rare. This is partially a result of an enormous lack of women?s education investments. Increasing women in the workforce is a challenge as well as an opportunity for Pakistan to develop as a country. Clearly Pakistan?s low rate of female literacy is an obstacle to increasing female workforce participation. As education levels rise, labor force participation must also rise for Pakistan to capture fully its return on investment in girls education. (Coleman Pg.1) How can a Pakistani Woman teach her country about their environment, when their country doesn?t teach them how to read? ...read more.

Paying them the same wages as men and giving them the same responsibilities as men, there was an opportunity for comparison. The women?s agricultural output was greater than that of men?s, women also had an advantage in Mowing, Grasses for mulch, collecting farm leaves etc. Essentially, the policy instrument of which is being implemented in this situation can be seen as charity or gender equality. Charity is what the Sindh Rural Women?s Uplift Group is doing by giving these women an opportunity to be involved . Gender Equality is shown in the allocation of resources towards women for once instead of being put under the control of Pakistani men. The policy instrument of gender equality could be implemented towards economic development whether they sound related or not. In pakistan?s case, gender equality would result in an efficient allocation of resources through the implementation of females in authoritative environmental positions. The allocation of resources is better left in the hands of women for the good of the economy. Gender equity can be a determinant of just distribution of resources and income by allowing the female population of pakistan to rise to autonomy level, for once in history evenly distributing resources and income among women and men. An ecologically sustainable scale of the economy would come in time with the progression of women?s authoritative roles in not only agricultural or environmentally based occupancies, but half of Pakistan?s economy. ...read more.