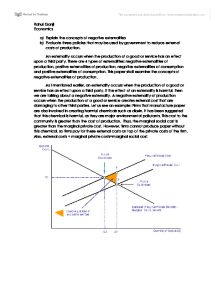 Resources are misallocated because too much paper is being produced at too low a price. There is welfare to society of the extra units (Q2 to Q1), because MSC is greater than MSB. In a free market situation, profit maximizing firms only take into account their private costs of production and therefore the government intervenes to rectify the situation. In order to overcome market failure, the government intervenes and decides upon 3 things: * Taxing a negative externality * Making production illegal or restricting production * Issus trade emission permits 1) By taxing a negative externality such as paper, the firms private costs increase, shifting the MPC curve upwards. If the tax is equal to the external costs, then the government has "internalized the externality". If not, then it reduces the deadweight burden, but doesn't eliminate it. There is still a welfare loss, but it is less than that if government hadn't intervened. ...read more.

3) The third option the government can adopt is issuing tradable emission permits. These are market-based solution to negative externalities of production. This allows firms to create set amounts of pollution levels. Once they are issued, firms can buy, sell and trade the permits on the market. Each firm has a quota of emissions that it is allowed to produce. If any firm pollutes at a higher level that its permit allows, it buys from other firms which raises costs. On the other hand, if the pollute less than their permit, and then they are allowed to sell their permit and make a money. The problem to this solution is that it does not lead to reduction in pollution; in fact firms simply pay the cost of polluting. Some pollute heavily and others do not! Also, the government faces a difficult decision when setting an acceptable level of pollution and it is often difficult to measure a firms pollution output. Sources of diagrams http://tutor2u.net/economics/revision-notes/a2-micro-externalities-overview_clip_image003.gif http://welkerswikinomics.com/students/wp-content/uploads/2008/08/diagram-3-taxing-a-negative-externality1.bmp ?? ?? ?? ?? Rahul Ganji Economics ...read more.