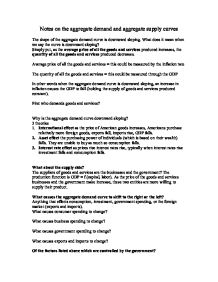 Notes on the aggregate demand and aggregate supply curves

Present income is the amount a person earns now. Future or permanent income is the expected earnings over a lifetime. Another factor that impacts the amount a person earns is his/her family income. Families make spending decisions together. Interest rates also affect consumption. Low interest rates inspire spending. Confidence in the economy and employment enables consumption. Tax rates directly affect that amount of money available for consumption. When personal taxes increase, disposable income decreases causing consumption to fall. Savings preferences impact consumption. Increases in savings decreases consumption. Some societies are more prone to save than others. Some age groups are more apt to save than others. Intertemporal decisions impact today's consumption as well. Life Cycle Hypothesis. Investment What is investment? An increase in business investment will lead to an increase in aggregate demand. When the aggregate demand curve increases the GPD increases, the unemployment rate falls, and inflation rises. What are the factors that effect investment? interest rates (-) corporate profits (+) expectations of future demand for the product (?) expansion opportunities (+) According to Keynes how can the government control investment? ...read more.