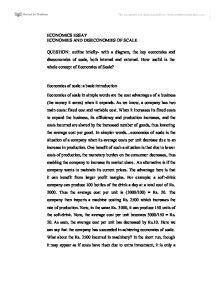 Outline briefly- with a diagram, the key economies and diseconomies of scale, both internal and external. How useful is the whole concept of Economies of Scale?

ECONOMICS ESSAY ECONOMIES AND DISECONOMIES OF SCALE QUESTION: outline briefly- with a diagram, the key economies and diseconomies of scale, both internal and external. How useful is the whole concept of Economies of Scale? Economies of scale: a basic introduction Economies of scale in simple words are the cost advantages of a business (the money it saves) when it expands. As we know, a company has two main costs: fixed cost and variable cost. When it increases its fixed costs to expand the business, its efficiency and production increases, and the costs incurred are shared by the increased number of goods, thus lowering the average cost per good. In simpler words...economies of scale is the situation of a company when its average costs per unit decrease due to an increase in production. One benefit of such a situation is that due to lower costs of production, the monetary burden on the consumer decreases, thus enabling the company to increase its market share. An alternative is if the company wants to maintain its current prices. The advantage here is that it can benefit from larger profit margins. For example: a soft-drink company can produce 100 bottles of the drink a day at a total cost of Rs. 3000. Thus the average cost per unit is (3000/100) ...read more.

marketing specialists) to perform a relatively narrow task. For example, larger schools can employ specialist biology, chemistry and physics teachers, while smaller schools can only employ a general science teacher; Managerial economies made in the administration of a large firm by splitting up management jobs and employing specialist accountants, salesmen, etc. 3) Financial economies: - larger businesses are deemed to be more credit worthy, therefore they have a better chance of being lent money and they are given a lower rate of interest on loans than smaller firms are. Thus, financial economies are created by borrowing money at lower rates of interest. For example, banks are more likely to lend to Colgate than to any local toothpaste company, though they can also raise money by issuing fares. 4) Marketing economies: as the business grows, the average advertising cost per unit and there the average cost per product unit will fall. For example, smaller firms may not be able to afford large scale advertisement campaigns, but large scale firms can advertise on television, radio, newspapers, etc with ease. 5) Purchasing economies: these are created when the firm buys in bulk therefore gaining a larger discount, administration of orders, etc. 6) Research and development economies: created when people are employed only to look into latest developments and improvements in the field. ...read more.

The long run average cost curve therefore starts to curve upwards. This occurs because the firm is now experiencing internal diseconomies of scale. Diseconomies of scale: Is a situation in which economies of scale no longer function for a firm. Rather than experiencing continued decreasing costs per increase in output, firms see an increase in marginal cost when output is increased. In other words, Diseconomies of scale occurs when Average Costs start to rise with increased output. They are of two types: Internal diseconomies of scale include: 1. Problems with communication: as a firm grows and its levels increase, communication becomes a problem, thus increasing inefficiency and increasing overall average costs of the firm 2. Motivation: in larger firms it becomes harder to satisfy workers. Thus workers don't give in their best, average output decreases and average costs increase. External diseconomies of scale include: 1. Traffic congestion: as a firm grows, suppliers move in, the area becomes an industrial centre, roads are jammed with trucks and cars, therefore delivery is late 2. Poor relationship between suppliers and buyers, especially in a large firm. 3. Competition for labor: more/larger firms mean increased demand for labor, and competition between workers increase, making the best workers harder to recruit and keep. 4. Increasing employment costs. 5. Government factors for example increased taxes and rates of interest. ...read more.