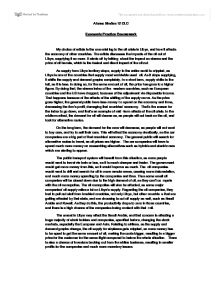 Economic Practice Coursework My choice of article is the one relating to the oil crisis in Libya, and how it affects the economy of other countries. The article discusses the impacts of the oil cut of Libya, supplying it no more. It starts off by talking about the impact on shares and the price of oil barrels, which is the fastest and direct impact of the oil cut. As supply from Libya territory stops, supply to the entire world is crippled, as Libya is one of the countries that supply most worldwide used oil. As it stops supplying, it shifts the supply and demand graphs completely. ...read more.

On the long term, the demand for the cars will decrease, as people will not want to buy cars, and try to sell their cars. This will affect the economy drastically, as the car companies are a big part of that countries' economy. The general public will search for alternative routes to travel, as oil prices are higher. The car companies will have to spend much more money on researching alternatives such as hybrids and electric cars which are starting to appear. The public transport system will benefit from this situation, as more people would want to travel via train or bus, as it is much cheaper and faster. ...read more.

The unrest in Libya may affect the Saudi Arabia, and that concern is affecting a huge majority of stock holders and companies, specified before, changing the stock markets, especially the European and Asia. Relating to airlines, as the supply and demand graphs change, the oil supply for airplanes gets crippled, so more money has to be spent to get the same amount of oil, making the costs bigger, resulting in a bigger price for the customer for the same flight compared to before the whole situation. There is also a chance of investors backing out from the airline business, resulting in smaller profits for the companies and much more monetary issues. ?? ?? ?? ?? Afonso Sim�es 12 CLC ...read more.