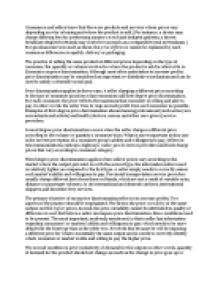 ﻿Consumers and sellers know that there are products and services whose prices vary depending on who is buying and where the product is sold. (For instance, a doctor may charge differing fees for performing surgery on rich and indigent patients; a decent breakfast obtained in Manila may cost twice as much as a comparable meal in Mindanao.) For goods and services such as these, the price difference cannot be explained by such reasons as differences in quality, delivery or packaging. The practice of selling the same product at different prices depending on the type of consumer, the quantity or volume involved or where the product is sold is referred to in Economics as price discrimination. Although most often undertaken to increase profits, price discrimination can be considered an important re-distributive mechanism and can be used to satisfy a desirable social goal. Price discrimination applies in three ways. A seller charging a different price according to the type of consumer practices what economists call first-degree price discrimination. ...read more.

Provincial transportation service providers usually charge different fares from those in Manila, which are not a result of variable costs, distance or passenger volumes. So do international and domestic airlines, international shippers and domestic ferry services. The primary objective of most price discriminating sellers is to increase profits. Two aspects of the practice should be emphasized. The first is the price variability of the same output, not the higher prices. Second, the price variability cannot be attributed to quality or difference in cost. But before a seller can impose price discrimination, three conditions need to be present. The most important, as already mentioned, is that a seller has information regarding consumers? or markets? ability and willingness to pay; which needs to be more detailed in the first type than in the other two. He needs this because he will be imposing a different price for what is essentially the same output and so needs to correctly identify which consumer or market is able and willing to pay the higher price. ...read more.

The amount of consumer(s) losses (or the gain in sellers? well-being) depends mainly on the type of price discrimination applied and the price inelasticity of demand. On the other hand, a seller can justify price discrimination by claiming that the higher prices charged to certain consumers serve to compensate for the lower prices paid by others -- the price discrimination is actually a cross-subsidy scheme. A further validation of this claim can be made in industries which are vital and necessary, but in which certain services would cease to exist if not for this cross subsidisation. (An airline can claim, for instance, that unprofitable flights to economically backward provinces are kept alive by its more lucrative routes.). But a claim in this regard should be checked against several premises. First, the consumers who benefit should deserve the subsidy, based on characteristics (e.g. economically disadvantaged) that society finds acceptable. Second, the additional consumption of the output should not represent any form of waste or misuse. Lastly, as in any situation where the seller acts to reallocate resources, care should be taken (possibly through government regulation) that resources actually end up with intended recipients. ...read more.