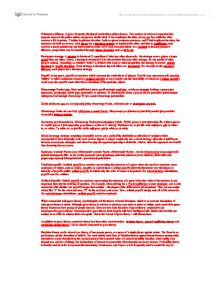 Prisonners dillema- A game frequently displayed in television police dramas. Two partners in crime are separated into separate rooms at the police station and given a similar deal. If one implicates the other, he may go free while the other receives a life in prison. If neither implicates the other, both are given moderate sentences, and if both implicate the other, the sentences for both are severe. Each player has a dominant strategy to implicate the other, and thus in equilibrium each receives a harsh punishment, but both would be better off if each remained silent. In a repeated or iterated prisoner's dilemma, cooperation may be sustained through trigger strategies such as tit for tat. Dominant strategy- A strategy is dominant if, regardless of what any other players do, the strategy earns a player a larger payoff than any other. Hence, a strategy is dominant if it is always better than any other strategy, for any profile of other players' actions. Depending on whether "better" is defined with weak or strict inequalities, the strategy is termed strictly dominant or weakly dominant. If one strategy is dominant, than all others are dominated. For example, in the prisoner's dilemma, each player has a dominant strategy. ...read more.

Although game theory is relevant to parlor games such as poker or bridge, most research in game theory focuses on how groups of people interact. There are two main branches of game theory: cooperative and noncooperative game theory. Noncooperative game theory deals largely with how intelligent individuals interact with one another in an effort to achieve their own goals. That is the branch of game theory I will discuss here. In addition to game theory, economic theory has three other main branches: decision theory, general equilibrium theory and mechanism design theory. All are closely connected to game theory. Decision theory can be viewed as a theory of one person games, or a game of a single player against nature. The focus is on preferences and the formation of beliefs. The most widely used form of decision theory argues that preferences among risky alternatives can be described by the maximization of the expected value of a numerical utility function, where utility may depend on a number of things, but in situations of interest to economists often depends on money income. Probability theory is heavily used in order to represent the uncertainty of outcomes, and Bayes Law is frequently used to model the way in which new information is used to revise beliefs. ...read more.

the same prize, could be applied to understand how merchant guilds, international trade treaties and even organized crime groups are formed and operate.Schelling, who teaches at the University of Maryland, used game theory in his 1960 book "The Strategy of Conflict" to focus on how the U.S. and the former Soviet Union maintained credible threats that were not likely to be used, given the threat of nuclear annihilation."If you have second-strike capacity, then it makes your opponent think twice," said Carl-Gustaf Lofgren, a member of the prize committee.Monday's award also highlighted developments in game theory that were lauded with the 1994 economics prize to Americans John Harsanyi and John Nash and German ReinhardSelten. Nash was portrayed in the 2001 Academy Award-winning film "A Beautiful Mind," starring Russell Crowe.Lofgren said Aumann's theories differed from Nash's by introducing an infinite repetition of the same game so as to find the best solution in long-term relationships instead of in a single encounter.The difference is illustrated in the so-called "prisoner's dilemma," one of game theory's best-known situations in which two partners in crime are put in separate cells and given an ultimatum: If one implicates the other, he may go free while his partner faces a firing squad. ...read more.