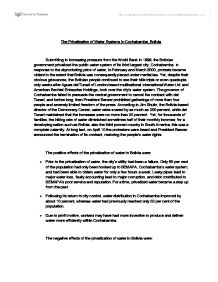 The Privatization of Water Systems in Cochabamba, Bolivia Submitting to increasing pressure from the World Bank in 1999, the Bolivian government privatized the public water system of its third largest city, Cochabamba. In response to the skyrocketing price of water, in February and March 2000, protests became violent to the extent that Bolivia was consequently placed under martial law. Yet, despite their obvious grievances, the Bolivian people continued to see their bills triple or even quadruple, only weeks after Aguas del Tunari of London-based multinational International Water Ltd. and American Bechtel Enterprise Holdings, took over the city's water system. The governor of Cochabamba failed to persuade the central government to cancel the contract with del Tunari, and before long, then President Banzer prohibited gatherings of more than four people and severely limited freedom of the press. ...read more.

Only 60 per cent of the population had only been hooked up to SEMAPA, Cochabamba's water system, and had been able to obtain water for only a few hours a week. Leaky pipes lead to major water loss, faulty accounting lead to major corruption, and debt contributed to SEMAPA's poor service and reputation. For a time, privatized water became a step up from the past. * Following its return to city control, water distribution in Cochabamba improved by about 10 percent, whereas water had previously reached only 55 per cent of the population. * Due to profit motive, workers may have had more incentive to produce and deliver water more efficiently within Cochabamba. ...read more.

* Mobs of angry and armed Bolivians took to the streets in protest, unleashing their pent-up backlash. Riots and civil disobedience disrupted the streets of Cochabamba, with one protest ending in a death. * Improper protection and provision of dirty water may have resulted, as quality, filtering, and sanitation may not have been properly maintained. * Furthermore, privatization efforts may have resulted in over-extraction and water waste, greatly impacting Bolivia's local ecosystems and environment. As these multinationals' duties are to their shareholders rather than to society or nature, reducing costs and maximizing profits are key. Clearly, the negative impacts of the privatization of water in Cochabamba, Bolivia far outweigh the slight benefits; however, such actions could potentially benefit a more financially stable region and its people. ...read more.