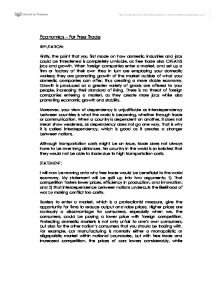 Economics - For Free Trade REFUTATION: Firstly, the point that you first made on how domestic industries and jobs could be threatened is completely unviable, as free trade also CREATES jobs and growth. When foreign companies enter a market, and set up a firm or factory of their own they in turn are employing your domestic workers; they are promoting growth of the market outside of what your domestic companies can offer, thus creating a more stable economy. Growth is produced as a greater variety of goods are offered to your people, increasing their standard of living. There is no threat of foreign companies entering a market, as they create more jobs while also promoting economic growth and stability. Moreover, your view of dependency is unjustifiable as interdependency between countries is what the world is becoming, whether through trade or communication. When a country is dependent on another, it does not mean show weakness, as dependency does not go one way. ...read more.

Protecting domestic markets is not only unfair to one's own consumers, but also for the other nation's consumers that you should be trading with. For example, car manufacturing is normally either a monopolistic or oligopolistic market within national boundaries, but with free trade and increased competition, the prices of cars lowers considerably, while output rises. This is due to the fact that monopolies are inefficient and are able to take advantage of consumers through higher prices; thus competition rectifies this issue through lower prices. Furthermore, other than creating lower prices for consumers through competition, free trade can also create efficiency in the production of a good or a whole industry. This happens as domestic companies have to modernize plants, production techniques and technologies to keep themselves competitive. With foreign companies a potentially offering lower price, due to a lower opportunity cost, domestic companies have no choice other than to become more efficient in utilizing their resources, such as labor, in order to stay afloat. ...read more.

Thus, the EU was formed as a collaborated effort in uniting Europe. The EU functions under a single market through a standardized system of laws which apply to all member states. As we see today Europe is no longer the hampered by war which has allowed them to grow economically. Europe has been revitalized with the creation of the EU, as free trade and interdependence created peace between nations. If a conflict arises, and an EU member attacks another member, the aggressor can be punished in the form of trade barriers, like high tariffs or even trade embargos, as the easiest way to cripple a nation is by hurting their economy. This example related back to the theory of comparative advantage and specialization as my counterparts have already mentioned. Thus, free trade creates interdependence between nations, which in turn creates peace due to the fear of the economic costs of war and possible trade embargos that would cripple a nation's economy. ...read more.