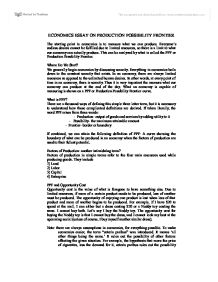 ECONOMICS ESSAY ON PRODUCTION POSSIBILITY FRONTIER The starting point in economics is to measure what we can produce. Everyone's endless desires cannot be fulfilled due to limited resources, so there is a limit to what our economy can actually produce. This can be analyzed by what is called the PPF or Production Possibility Frontier. Where Do We Start? We generally begin economics by discussing scarcity. Everything in economics boils down to the constant scarcity that exists. In an economy, there are always limited resources as opposed to the unlimited human desires. In other words, at every point of time in an economy, there is scarcity. Thus it is very important the measure what our economy can produce at the end of the day. What an economy is capable of measuring is shown on a PPF or Production Possibility Frontier curve. What is PPF? There are a thousand ways of defining this simple three letter term, but it is necessary to understand how these complicated definitions are derived. If taken literally, the word PPF arises from three words: - Production- output of goods and services by adding utility to it - Possibility- the maximum attainable amount - Frontier- border or boundary If combined, we can attain the following definition of PPF: A curve showing the boundary of what can be produced in an economy when the factors of production are used to their fullest potential. ...read more.

For example, at point A FA of food and CA of computers can be produced. Or the resources could be allocated differently such that it could produce FB of food and CB of computers at point Y. all the points on the frontier such as A and B are productively efficient as the available resources are used to full utility without being wasted. When an economy is productively efficient, it can only produce more of one product by producing less of another; resources have to be shifted form one product to another. Thus, a company will have an opportunity cost. For example, if x of food is produced, then the opportunity cost of the economy is y units of computers. Let's look at another example. Consider an economy that can only produce only wine and cotton. According to the PPF, point A, B and C on the curve represent the most efficient use of resources in the economy. Point X represents inefficient use of resources, while point Y represents the goals that the economy cannot achieve due to present inadequate resources. The finance minister of that country wants more production of wine in that country. For that, the country will have to give up some of its resources used for producing cotton (Point A). if the economy wants to produce more cotton (points B and C), it would have to divert the resources from making wine, to making cotton, and will produce less wine than it would produce at point A. ...read more.

3) PPF shows the combination of only two goods, but it actually can be taken as a representation of a large variety of goods. Example: Points in the curve: Points C, A and B represent the production of vehicles and computers using all the available resources to the optimum potential. Points lying inside the PPF curve (example point X) occur when the economy is not making efficient resources available (there are "unemployed resources"). We could increase the output of goods by aiming to reach points A, B or C. Points lying outside the curve (example point D) are currently unattainable. We need to increase our total resources and improve technology to reach this point. PPF Assumptions - no change in technology - resources are fixed - input endowments given - all production resources are fully employed - time is given - constant supply of raw materials - prices of all commodities stay the same PPF and Opportunity Cost The slope of the PPF measures the marginal opportunity cost of producing one good when another is sacrificed. Importance of PPF PPF is useful in questions about 1) Efficiency 2) Equity 3) Tax 4) Transfer Policy 5) Composition of Output 6) Growth and Productivity It also helps us determine and understand opportunity cost, choice and scarcity (scarce resources). Quick- Quiz Lets look at this graph again. Which do you think will be the best economy from point A, B and C? Answer- point A, because it represents equal allocation of resources due to which production will be maximum. ...read more.