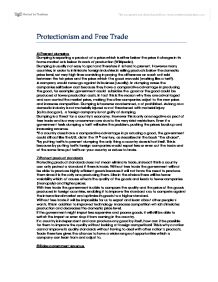 Protectionism and Free Trade 6) Prevent dumping Dumping is exporting a product at a price which is either below the price it charges in its home market or is below its costs of production (Wikipedia). Dumping is usually not easy to spot and therefore it is hard to prevent. However many countries, in order to intimidate foreign industries in selling products below the domestic price level, set very high fines consisting in paying the difference on each unit sold between the fair price and the price which the good was sold (working like a tariff). A company would never go against its business (usually). In dumping cases the companies sell below cost because they have a comparative advantage in producing the good, for example: government could subsidize the good or the good could be produced at lower production costs. In fact this is the reason why they are advantaged and can control the market price, making the other companies adjust to the new price and increase competition. ...read more.

Without free trade it will be impossible for us to export and learn about other people's wants. This in addition to improved technology increases competition which stimulates production and decreases the domestic price level. If the government might import less expensive and poorer goods, it will still be able to switch the import or even stop it from coming in the country. If a country is independent and can produce any good by itself, how can it be possible for them to improve the quality without looking at foreign competitors? This is why a nation cannot improve its quality standards without having to deal with other nation's products. Trade therefore gives the chance to have a wider range of opportunities which a company can learn from and adjust to. 8)Raise government revenue A country produces goods and services which are then paid for and consumed. This is how basically a government earns his revenue. With trade there are changes. Other countries have access to our goods and we have access to their goods as well. ...read more.

The poorly paid industries opening in Mexico were attractive to Mexican standards but were not allowed by the American standards. Low wages are still better than no wages. "The tragedy of Mexico and other poor nations is low skills and insufficient education. I don't think it does the people of Mexico any good to keep out low-wake foreign employers if the alternative is even lower wages paid be domestic companies"(Roberts 85). As we can read in the above paragraph taken from the choice, in developing countries there is less and poorer education, which leads to low wages and unskilled workers. The jobs are not paid well and with the help of a developed country's company it would be easier for those less developed countries to slowly increase their standards and at the same time increase their national income. If a country does face lower cost labor with low skilled workers coming into the country, it can still increase the minimum wage and prepare training programs for those unskilled workers. If it is too expensive for a nation it could move those workers in foreign countries and still make income but at the same time increase another countries' standards of living. ...read more.