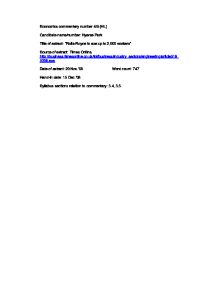 Economics commentary number 4/5 (HL) Candidate name/number: Hyeree Park Title of extract: "Rolls-Royce to axe up to 2,000 workers" Source of extract: Times Online, http://business.timesonline.co.uk/tol/business/industry_sectors/engineering/article5195308.ece Date of extract: 20 Nov.'08 Word count: 747 Hand-in date: 15 Dec.'08 Syllabus sections relation to commentary: 3.4, 3.5 According to the article, Rolls-Royce has announced that they will further cut jobs from their 2,300 cut conducted during 2008. It is planned that, in 2009, 1,500 to 2,000 people will lose their jobs, about 4% of their current 39 000 employees. The cut in employment is a response to the decrease in demand for airplanes. There are less airplanes that are being demanded in the market and so Rolls-Royce will only suffer from keeping production rates high. Diagram 1: Shifts in AD and SRAS for Airplane Production As can be seen on Diagram 1, because the aggregate demand (AD, C+I+G+(X-M)) ...read more.

With this and the recent surge in unemployment, people have become more afraid. Therefore those who are still employed at Rolls-Royce will work more efficiently to keep their jobs, allowing the firm to operate with even less labour. This could result in further cuts in labour. It can also explain the additional employment reduction made even after the cuts in 2008. Since costs are lowered, this could benefit the firm, but to the labourers this could increase the threat of losing their position. Moreover because people are worried about their future, they will consume and invest less and begin to save instead, decreasing the aggregate demand, decreasing economical growth of the United Kingdom. According to the article, the firm is the "latest leading British company to impose heavy job losses." This can be interpreted as that the demand for Rolls-Royce engines and thus airplanes are quite elastic, quantity demanded is sensitive to the change in price, confirmed by the large cut made by Rolls-Royce in their employment sector. ...read more.

During this process, the government must finance transfer payments to those who are unemployed so that they are able to spend some money. However, they do not have enough resources to overcome this increase in government spending, since they are already on a tight budget which is already concerned with the financial crisis. Moreover, it is the whole of Britain that is facing high labour cuts. "In October the number of people out of work grew by 140,000 to 1.82 million" as can be seen below from the movement from point A to point B Diagram 2: PPF curve of Airplanes and Airplane engines, before and after the reduction in employment Combating this unemployment will be difficult. Less people are working reducing taxes and government budget. Therefore the government's only option is to create jobs. Perhaps some sectors of the economy should be bought by the state. These state firms will provide jobs for people since their objective will not be to maximise profit but to keep unemployment low. ...read more.