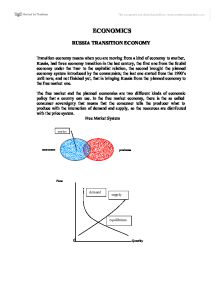 Transition economy means when you are moving from a kind of economy to another, Russia, had three economy transition in the last century, the first one from the feudal economy under the Tsar to the capitalist relation, the second brought the planned economy system introduced by the communists; the last one started from the 1990’s until now, and not finished yet, that is bringing Russia from the planned economy to the free market one.

The free market and the planned economies are two different kinds of economic policy that a country can use. In the free market economy, there is the so called consumer sovereignty that means that the consumer tells the producer what to produce with the interaction of demand and supply, so the resources are distributed with the price system.

In the planned one is different from the free market because the state decides how to distribute resources with the plan system, so the government decide what to produce not the consumer. Then the plan decided by the government is passed to the managers and then to the people and to the industries.

In the free market there is the private ownership while in the planned there is the public one. These differences causes when a country sifts from a kind of economy to another, lots of problems come out, such as organization. Countries like the Balcanic republics or ex-USSR members, so dependent on the Moscow supplies that had a lot of problems to develop.

In Russia the inflation continues to be around 10% and the capital flights (money invested) in Russian economy has been weakened a lot. The level of state ownership production, and employment in the Russian economy is at least as high now as it was in 2003. On the other hand Russia, since 1991, Russia’s GDP growth has been twice bigger than the other G-8 members, the foreign debt has been reduced from 50% of GDP to less than 30%, and its $3.3 billion debt to the International Monetary Fund was repaid ahead of schedule in 2005. Of the $40 billion owed to its creditors, Russia has paid $15 billion ahead of schedule, and its foreign exchange reserves have increased to more than $250 billion. The number of privately ownership has been doubled in the past years, to about 80% of all enterprises, while the state ownership enterprises decrease from 14% to less than 4%.

Until now all these problems were not so evident, as Russia is one of the main oil and gas exporters, and as the prices of those resources are so high these people were going to be richer and richer, but since 24th July 2008 the price of oil has lost more than 1/3 of its record pick in 147$ per barrel on 11th July 2008. This has make Russia fell in a financial crisis on markets. This and the fears of the war against Georgia made an opportunity to the government to intervene on the economy.

So in Russia looks like that they are not moving towards the free market economy but stay in the middle between the market and the planned economy. In fact there were many cases where the government took over private properties without even advise, but due to the recent market crash these intervenes has been masked, but what is going to happen when the market will get to the normal situation? If Russia is really going to go toward the market system many enterprises are going to be privatize.

However no one can predict the future in economics.