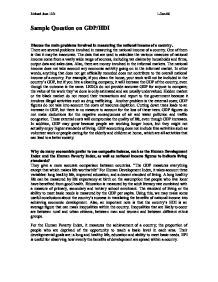 Cutting down trees leads to an increase in GDP, but there is no measure to account for the loss of these trees. GDP figures do not make deductions for the negative consequences of air and water pollution and traffic congestion. These external costs will compromise the quality of life, even though GDP increases. In addition, GDP may grow because people are working longer hours, but they might not actually enjoy higher standards of living. GDP accounting does not include free activities such as volunteer work or people caring for the elderly and children at home, which are all activities that can lead to a better society. Why do many economists prefer to use composite indexes, such as the Human Development Index and the Human Poverty Index, as well as national income figures to indicate living standards? ...read more.

The standard of living or the ability to meet basic needs is measured by the GDP per capita. Using this, we may make some useful conclusions about the country's success in translating the benefits of national income into achieving economic development. Also, an important note is that the country's HDI is an average figure that can mask inequalities within the country. Inequalities that are likely to occur are between rural and urban citizens, between men and women and between different ethnic groups. For the Human Poverty Index, it measures the achievement of a country; the proportion of people who are deprived of the opportunity to reach a basic level in each area. Their developmental goals are: a long and healthy life, education and ability to meet basic needs. HPI is useful for observing how evenly the benefits of development are spread within a country. ?? ?? ?? ?? Richard Juan 12D 1-Dec-08 ...read more.