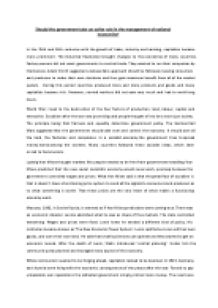 Should the government take an active role in the management of national economies?

﻿Should the government take an active role in the management of national economies? In the 15th and 16th centuries with the growth of trade, industry and banking, capitalism became more prominent. The Industrial Revolution brought changes to the economies of many countries. Factory owners did not want governments to control trade. They wanted to run their companies by themselves. Adam Smith suggested a laissez-faire approach should be followed, leaving consumers and producers to make their own decisions and thus gain maximum benefit from all of the market system. During this period countries produced more and more products and goods and many capitalists became rich. However, normal workers did not earn very much and had to work long hours. World War I lead to the destruction of the four factors of production: land, labour, capital and enterprise. Socialism after the war was promising and people thought of it to be a more just society. The principle being that fairness and equality determine government policy. ...read more.

Lenin knew he needed a different kind of policy. His institution became known as ?The New Economic Power System?. Lenin said farmers can sell their own goods, and own their own land. He said that small businesses can operate and they started to get an economic revival. After the death of Lenin, Stalin introduced ?central planning?. Under him the communist party planned and managed every aspect of the economy. While communism seemed to be forging ahead, capitalism looked to be doomed. In 1923, Germany and Austria were living with the economic consequences of the peace after the war. Forced to pay unbearable war reparations the defeated government simply printed more money. The result was inflation. More inflation. Hyperinflation. Hyperinflation wiped out the savings of the middle class, due the government intervening in the economy. The 1920s, was a boom time for American cities. Americans were buying stock. The stock market, the New York Stock Exchange, became a National Past-time. It was a classic stock market bubble. Then on Black Thursday, October 24th 1929, the bubble burst. ...read more.

It was the first time that the government took an active role in attempting to secure American individuals from unseen drastic changes in the market. For Roosevelt and the New Deal, they were at war with the Great Depression, and they responded with frenetic activity, relief programs for the unemployed, for the hungry; programs to get people back to work. They instituted a program of regulating capitalism in order to protect people from what they saw as the recklessness of the unfettered market. Privately, Roosevelt feared the market system had failed, so he created an entire alphabet of new agencies to regulate banks, the stock market, capitalism itself. In conclusion, in the battle of ideas, the pendulum had swung from government to market, from Keynes to Hayek. Today Keynes? theory is widely accepted and modern countries combine capitalism with some kind of government control. Most people feel that free market economy should remain but the government should still be around to see that economic rules are kept, and solve issues such as unemployment and inflation. ...read more.