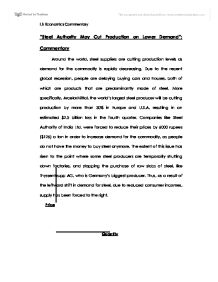 "Steel Authority May Cut Production on Lower Demand": Commentary Around the world, steel suppliers are cutting production levels as demand for the commodity is rapidly decreasing. Due to the recent global recession, people are delaying buying cars and houses, both of which are products that are predominantly made of steel. More specifically, ArcelorMittal, the world's largest steel producer will be cutting production by more than 30% in Europe and U.S.A, resulting in an estimated $2.5 billion loss in the fourth quarter. Companies like Steel Authority of India Ltd. were forced to reduce their prices by 6000 rupees ($126) a ton in order to increase demand for the commodity, as people do not have the money to buy steel anymore. The extent of this issue has risen to the point where some steel producers are temporarily shutting down factories, and stopping the purchase of raw slabs of steel, like ThyssenKrupp AG, who is Germany's biggest producer. ...read more.

This solution is based around a buffer stock scheme (A form of intervention to try to stabilize the price of a commodity. Stocks of the commodity are kept and sold when the price is high to try to reduce it. When the price is low further stocks of the commodity are bought)4. The marginal social benefits (incremental benefit of an activity as viewed by the society and expressed as the sum of marginal external benefit and marginal private benefit)5 of implementing a buffer stock scheme would be price stability, and economic growth. By storing the extra steel, if in the future, when the world comes out of the recession, there would ever be a shortage (which would result in high prices and lower demand), prices would stabilize as the large firms would then be able to sell the stored steel back into the market. ...read more.

In conclusion, the marginal social costs (the cost incurred by both the firm and society in producing each extra unit of a good)6 of setting up a buffer stock scheme would be, the hefty amount of start-up capital, the costs of storage, and the fear of scare buyers when the recession ends. Although these MSC's are all major financial concerns, the MSB's outweigh them, as people will be eager to invest in the steel companies, buy new houses and cars, and begin new construction projects (eliminates the fear of scarce buyers). These actions all require steel, meaning thereby that the total revenue generated through this surplus of steel will be greater than the start-up capital, and the storage costs. 1 Notes: Commodity Markets - 29th September, 2008 2 Notes: The law of Supply - September 24th, 2008 3 Notes - The Law of Demand: September 17th 2008 4http://www.bized.co.uk/cgi-bin/glossarydb/browse.pl?glostopic=0&glosid=1121 5 http://www.bized.co.uk/cgi-bin/glossarydb/browse.pl?glostopic=1&glosid=653 6 http://www.businessdictionary.com/definition/marginal-social-benefit.html ?? ?? ?? ?? I.B Economics Commentary ...read more.