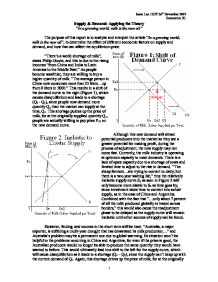 Supply and Demand - Applying the Theory

Supply & Demand: Applying the Theory "In a growing world, milk is the new oil" The purpose of this report is to analyze and interpret the article "In a growing world, milk is the new oil", to determine the effect of different economic factors on supply and demand, and how that can affect the equilibrium price. "There's a world shortage of milk", states Philip Goode, and this is due to the rising incomes "from China and India to Latin America to the Middle East." As people become wealthier, they are willing to buy a higher quantity of milk. "The average person in China now consumes more than 25 liters...up from 9 liters in 2000." This results in a shift of the demand curve to the right (Figure 1), which causes disequilibrium and leads to a shortage (Q2 - Qe), since people now demand more quantity Q2 than the market can supply at the time, Qe. ...read more.

Combined with the fact that "...only about 7 percent of all the milk produced globally is traded across borders," this would also cause the readjustment phase to be delayed as the supply curve will remain inelastic until other sources of supply can be found. However, finding new sources in the short term will be hard. "Australia, a major exporter, is suffering a multi-year drought that has devastated its milk production..." and Australia's problem may be a permanent one due to global warming. Its situation won't be helpful to the problems occurring in China and Argentina, for even if the price is good, the Australian producers would no longer be able to produce the same quantity they would have wanted to before. This would ultimately lead to a shift to the left for the supply curve, which will cause disequilibrium as it leads to a shortage (Qe - Q2), since the supply can't keep up with the current demand of Qe. ...read more.

As seen in Figure 3, all these factors causes a shift in the supply curve to the left, thus leading to disequilibrium. Again, over a period of time, Ceteris Paribus, the market will move back to the new equilibrium Qe2 with a new price Pe2. As seen from all the above reasons, both supply and demand factors have contributed to the shortage of milk, thus leading to disequilibrium and creating a serious shortage situation and pushing up the prices. Though the markets are quick to react to the booming demand, due to the shortage of time, the supply curve will remain relatively inelastic until more producers come into the market. However, due to climate changes, inflation and government intervention, this could ultimately delay the production, thus causing higher prices of milk to last, or increase even further. Word Count: 748 ?? ?? ?? ?? Jason Lee 12HT 26th November 2007 Economics HL 1 ...read more.