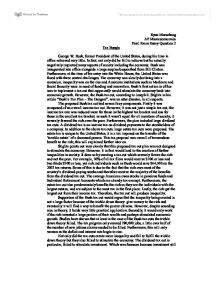 Ryan Marschang AP Macroeconomics Final Exam Essay Question 2 Tax Bungle George W. Bush, former President of the United States, during his time in office achieved very little. In fact, not only did he fail to achieve but he actually negatively impacted many aspects of society including the economy. Bush was inaugurated into office alongside a large surplus bequeathed from Bill Clinton. Furthermore, at the time of his entry into the White House, the United States was faced with three central challenges. The economy was slowly declining into a recession, inequality was on the rise and American institutions such as Medicare and Social Security were in need of funding and innovation. Bush's first action in office was to implement a tax cut that supposedly would stimulate the economy back into economic growth. However, the Bush tax cut, according to Joseph E. Stiglitz in his article "Bush's Tax Plan - The Dangers", was an utter disaster, in all respects. The proposed Bush tax cut had several key components. Firstly it was composed of an overall income tax cut. However, it was not just a simple tax cut, the income tax rate was reduced more for those in the highest tax bracket and less for those in the smallest tax bracket, as such it wasn't equal for all members of society; it severely favored the rich over the poor. ...read more.

The tax program only created 190,000 jobs, a little over half of the number of new jobless claims needed to be filled. Furthermore, this will only worsen as the deficit and interest rate begin to rise. Not only did the tax cuts create more inequality and fail to fulfill the trickle down theory but they also failed to stimulate the economy. The dividend tax cut in particular, failed to stimulate investment. Which was foreseen because investment still did not increase with lower and lower interest rates. As such, it was not a smart piece of fiscal policy. Generally, a tax cut would spur a jump in stock prices due to expectations. However, the Bush tax cut was only successful in creating a small, one day effect on stock prices. Extremely rich individuals are the only ones a dividend tax cut affects. And furthermore, although they are affected, when their demand for stock increases and they drive the price of those stocks up, others will simply invest elsewhere. The unsuccessful tax cuts will ultimately lead to a hike in the United States deficit because they are losing tax revenue. Furthermore, there is a strong correlation between deficits and interest rates; when interest rates rise, the deficit rises. An increase in the interest rate will deter investment and counteract the purpose or goal of tax cuts in the first place. ...read more.

It is of course debatable however this theory would show that the tax rate that generates the greatest amount of revenue is not 100% but rather a compromise tax rate. In my opinion it's not that easy to find a tax cut that would be the best in terms of stimulating the economy and reducing the level of income inequality. However, its general characteristic could be described. It would be one that would cut taxes for the poorest citizens and states/localities, as they will be the ones with the greatest propensity to consume and will be more likely to spend their increase in income. Furthermore, by cutting taxes for the poorer citizens it will further create equality in society. As such, this is very similar to the proposed tax cuts that Stiglitz proposes in his article. In conclusion, it is quite remarkable to see how poorly President George Bush utilized his surplus to help his nation. Bush's tax cuts failed to stimulate the economy and actually in turn, negatively impacted society by creating further inequality. Moreover, Bush failed to bolster the medicare and social security institutions and to increase the automatic stabilizers that would help the nation in midst of recession. In the end, Bush's tax cuts were simply a disaster and in order for fiscal policy to be utilized properly, tax cuts must be imposed in the way Stiglitz and I have proposed them to be. Let this be a lesson learned. ...read more.