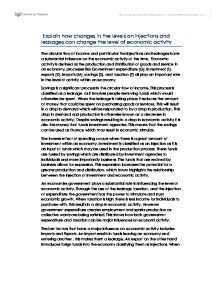 The circular flow of income and particular the injections and leakages have a substantial influence on the economic activity of the time. Economic activity is defined as the production and distribution of goods and service in an economy,

Explain how changes in the levels on injections and leakages can change the level of economic activity The circular flow of income and partrticular the injections and leakages have a substantial influence on the economic activity of the time. Economic activity is defined as the production and distribution of goods and service in an economy, processes like Government expenditure (G), investment (I), exports (X), imports (M), savings (S), and taxation (T) all play an important role in the level of activity within an economy. Savings is a significant process in the circular flow of income. This process is classified as a leakage as it involves people removing funds which would otherwise be spent. ...read more.

This means that the savings can be used as finance which may result in economic stimulas. The inverse effect of spending occurs when there is a great amount of investment within an economy. Investment is classified as an injection as it is an input of funds which may be used in the production process. These funds are fueled by savings which are distributed by investment agencies to individuals and more importantly business. The funds that are recived by business allows for expansion. This expansion increases the potential for a greater production and distribution, which inturn highlights the relationship between the injection of investment and economic activity. ...read more.