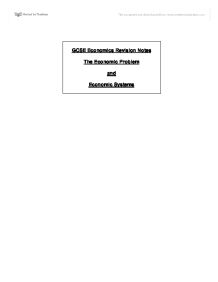 GCSE Economics Revision Notes The Economic Problem and Economic Systems The Economic Problem Economics is a social science which studies how humans behave when faced by the economic problem of scarcity. Economic problem = human wants for goods and services are unlimited, but resources for producing goods and services to satisfy the wants are limited. Reasons for unlimited wants include * Most goods wear out over time and need replacing - eg food, clothes, furniture * New goods and services are invented creating new wants - eg personal computers, games consoles * Human greed Resources at any moment in time are limited because of the restrictions of the Earth. Renewable resources = resources that can be replaced (eg vegetation and people). Non-renewable resources = resources that can only be used once and will ultimately run out (eg fossil fuels, mineral ores). Some of these resources can be recycled. Free good = a good that is not scarce, so is available in sufficient quantity to satisfy all human wants (eg air). If all goods and services are free, the economic problem is solved and a state of economic bliss would exist. Choice and Opportunity Cost As a result of the economic problem of scarcity, people cannot have everything they want from their limited resources, so they are forced to make choices about how to use their resources. Each choice that people make involves an opportunity cost. Opportunity cost = the next best alternative use for some resources that is sacrificed by choice. Example of opportunity cost On a hot afternoon, a student spends �1.00 on an ice cream. ...read more.

The production possibility curve can be used to illustrate several important economic ideas. * The economic problem of scarcity - people may want a combination of goods that gives them 1000 consumer goods and 500 capital goods (point C). However, the economy's scarce resources limit production to the line AB, which does not reach point C. * The opportunity cost of a choice - if the economy is at point E producing 600 consumer goods and 200 capital goods, and chooses to increase its production of capital goods to 300, it will have to move to point F, sacrificing 200 consumer goods. The opportunity cost of the 100 extra capital goods is 200 fewer consumer goods. The gradient of the curve reveals the opportunity cost. * The problem of unemployment - if the economy is at point G (500 consumer goods and 200 capital goods) beneath the curve, it must mean that either some resources are not being used (are unemployed) or that technology is not being used efficiently. * The economic growth of the economy - it may be possible to shift the production possibility curve to the right by achieving economic growth. If this happens, line AB will move to line JK. This growth can be caused by o more resources becoming available o better quality resources becoming available o improved technology becoming available The curve may shift left if resources are lost or destroyed (eg in a war). Economic Systems An economy or economic system is a decision-making system designed to tackle the three key choices or decisions that stem from the economic problem of scarcity. ...read more.

* Planners can distribute goods equally or fairly if they wish, so there is less chance of income inequality. Disadvantages of a planned economy * Resources used in planning are not available to produce goods and services to satisfy wants. * Planners may get the plan wrong causing gluts and shortages of goods. * Once in operation it is difficult to adjust the plan to cope with changing economic conditions. * There is limited choice and variety of goods for consumers. * There is little incentive to work hard or to take risks because the state owns all resources and planners decide on the distribution of goods. The economy is likely to grow more slowly and technology may lag behind others. * Planners may be corrupt in their decision making. A Mixed Economy A mixed economy contains elements of both a market economy and a planned economy. The key decisions of what? how? and for whom to produce? are partly answered by market forces and partly by government planners. The aim of a mixed economy is to get the best of both systems without too many of the disadvantages. All countries have mixed economies, but the strength of the mixture varies. In the UK, about 60% is determined by market forces and 40% by planners. The functions of the government in the UK economy include * The provision of public goods. * The provision of an adequate level of merit goods. * The redistribution of income from rich to poor. * The control of externalities and consumption of demerit goods. * The protection of individuals against powerful market influences like monopolies. * The management of the economy to achieve o full employment o stable prices o a healthy balance of payments o steady economic growth. ...read more.