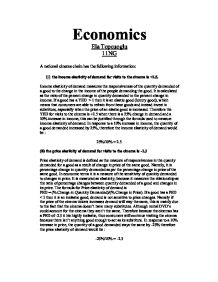 The economics of A national cinema chain.

Economics Ela Topcuoglu 11NG A national cinema chain has the following information: (i) the income elasticity of demand for visits to the cinema is +2.5. Income elasticity of demand measures the responsiveness of the quantity demanded of a good to the change in the income of the people demanding the good. It is calculated as the ratio of the percent change in quantity demanded to the percent change in income. If a good has a YED > 1 then it is an elastic good (luxury good), which means that consumers are able to refrain from these goods and instead invest in substitues, especially when the price of an elastic good is increased. Therefore the YED for visits to the cinema is +2.5 when there is a 25% change in demand and a 10% increase in income, this can be justified through the formula used to measure income elasticity of demand: In response to a 10% increase in ...read more.

If a good has a PED < 1 then it is an inelastic good; demand is not sensitive to price changes. Namely if the price of the cinema tickets increases demand will stay the same, this is mainly due to the fact that the cinema doesn't have many substitutes. Although rental DVD's could account for the cinema they aren't the same. Therefore because the cinemas has a PED of -2.3 it his highly inelastic, thus consumers will continue visiting the cinema because there isn't anything good enough to act as its substitute. In response to a 10% increase in price, the quantity of a good demanded stays the same by -23% therefore the price elasticity of demand would be : -23%/10% = -2.3 (ii) The cross elasticity of demand for visits to the cinema with respect to the rental payment of pre-recorded video films is +3.8 The cross elasticity of demand measures the quantity demanded for one good in response to a change in price of another good. ...read more.

As explained previously for cross elasticity of demand an XED > 0 determines that the goods are substitutes, however in this case the cinema and popcorn are complements of each other because they have an XED < 0. The fact that they are complements reinforces the idea that if the price of popcorn increases the demand for the cinema will decrease, considering that when consumers go to the cinema they eat popcorn. Therefore if the price of one good increases the demand for the complement good decreases. If the cinema ticket prices increased, people wouldn't demand popcorn because without the cinema ticket they don't have access to the popcorn. An XED of -1.0 can be calculated through the formula XED = (% Change in demand for good Y)/(% Change in price of good X ). Therefore if the % change in demand for popcorn is 10% and the % change in the price of cinema tickets is -10% the XED will be -1.0. ...read more.