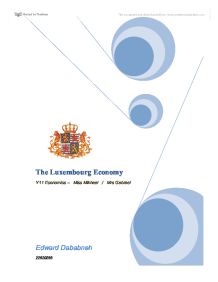 The Luxembourg Economy Y11 Economics - Miss Mikhael / Mrs Gabrael Edward Dababneh 22620266 Table of Contents Luxembourg- Prologue 3 Luxembourg- Quality of life and Social indicators 3 Luxembourg- Quality of life and Social indicators CONTINUED 4 Luxembourg- Employment and Unemployment 4 Luxembourg- Employment and Unemployment CONTINUED 5 Luxembourg- Recent patterns of inflation 5 Luxembourg- Recent Patterns of and Domestic Production and Trade 6 Luxembourg- The role of Government within Luxembourg 6 Luxembourg- The role of Government within Luxembourg CONTINUED 7 Luxembourg- The effects of Globalisation 7 Luxembourg- Prologue Luxembourg is a highly industrialised and prosperous economy, which is currently recovering from the economic turmoil of 2009 and more recently the European debt crisis. These downfalls have followed long periods of economic success and constant growth giving Luxembourg a Gross Domestic Product (GDP) to envy. Luxembourg has been commended for its financial services and banking ability which have consistently been industries fuelling its economic development. As a nation it is a relatively small state with a population of around 480 000. Due to this minute labour force there are a range of implementations guaranteeing a constant flow of employment, which have also aided in insuring an adequate quality of life. ...read more.

Theses policies together will help to increase the population size as well as the participation rate, which ultimately determines the level national growth. This also shows how these strategies are effective in promoting the further economic development of Luxembourg. Luxembourg- Recent patterns of inflation The rate of inflation within Luxembourg is derived from the level of the consumer price index.(CPI). The CPI is a measure of the change in price of the goods and services that are purchased for consumption. Resent trading patterns have shown that Luxembourg's level of inflation is measured around 2.417%, which is relatively low in comparison to other European markets. This information simply tells us that the price of Goods and services has increase relatively slower, in comparison to the surrounding economies. Source 3- Luxembourg Inflation rate over 7 Years The major body that attempts to control the rate of inflation is the Central Bank of Luxembourg (BCL). This financial intermediary attempts to regulate its economy by maintaining inflation levels below 3%. This is ultimately achieved through the implementation of a monetary policy; which increases or decreases the interest that other financial institutions charge. While examining source 3 it becomes clear that inflation has been sufficiently regulated over the 7 year period. ...read more.

Without the aid of globalisation, international investment would be extremely difficult, stressing its importance. As well as this, transnational trade relives some pressure off Luxembourg's domestic market, once again exemplifying its importance. Luxembourg is a strong supporter of multinational organisations, and this is evident as they are one of six founding members of the European Union. Having policies that links Luxembourg with other economies also allows domestic firms to expand their scale of production and sell internationally. When many firms increase their scale of production, it promotes growth within the economy and it sustains sound levels of development within the nation. Luxembourg- Conclusion Luxembourg has been an economy that has achieved rapid and sustained growth over the past 25 years, and its living standards are some of the highest in the OECD. However, in the recent years following the crisis output has contracted and unemployment has risen. This shows how heavily the nation has been exposed to the global downturn. Despite this strategies like the monetary and fiscal policy have effectively and successfully supported stabilisation and economic growth within the economy. The nation has emerged as a major international financial centre, and this has been crucial to the development of the economy and the sustained living standards. All in all, Luxembourg has been and continues to be a flourishing and prosperous Country. ...read more.