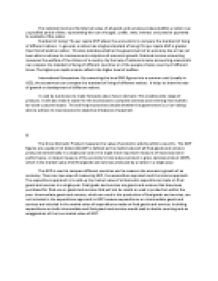 The national income and the GDP

﻿The national income is the total net value of all goods and services produced within a nation over a specified period of time, representing the sum of wages, profits, rents, interest, and pension payments to residents of the nation. Standard of Living: The per capita GNP allows the economists to compare the standard of living of different nations. In general, a nation has a higher standard of living if its per capita GNP is greater than that of another nation. This also indicates whether the government of an economy has or has not been able to achieve its macroeconomic objective of economic growth. ...read more.

It helps to show the rate of growth or development of different nations. It used by businesses to make forecasts about future demand. This enables wide range of products. It will also make it easier for the businesses to compete overseas and entering new markets for wider customer bases. This will help economists decide whether the government is or isn?t being able to achieve its macroeconomic objective of balance of payment. b) The Gross Domestic Product measures the value of economic activity within a country. The GDP figures are usually in US dollars ($).GDP is defined as the market value of all final goods and services produced domestically in a single year and is the single most important measure of macroeconomic performance. ...read more.