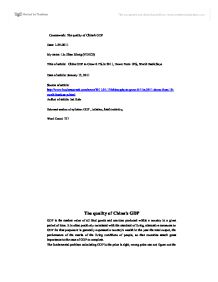 The quality of China's GDP

Coursework: The quality of China's GDP Date: 1-29-2011 My name: Liu Zhao Xiong (VINCE) Title of article: China GDP to Grow 8.7% in 2011, Down From 10%, World Bank Says Date of article: January 13, 2011 Source of article: http://www.businessweek.com/news/2011-01-13/china-gdp-to-grow-8-7-in-2011-down-from-10-world-bank-says.html Author of article: Ian Katz Relevant section of syllabus: GDP , inflation, hard currency, Word Count: 727 The quality of China's GDP GDP is the market value of all final goods and services produced within a country in a given period of time. It is often positively correlated with the standard of living, alternative measures to GDP for that purpose.It is generally expressed a country's wealth in the year the total output, the performance of the merits of the living conditions of people, so that countries attach great importance to the case of GDP to complete. ...read more.

Limited freedom of money, so the Chinese are not recognized as a market economy. Today, we should pay more attention to the quality of GDP, not only the quantity of GDP, but also the better quality of GDP. China's phenomenal economic growth in recent years was primarily due to growth in the secondary and tertiary sector of the economy. In fact, the primary sector (which is mainly the agriculture) grew only slightly since 1996 (changes in the proportions between primary, secondary and tertiary sector. Among economists there is a debate about the true values of China's GDP growth. Some economists have argued that China's economic growth rates are actually much lower than reported by the National Bureau of Statistics. However, in the context of rural and regional development it is more important that the relative contribution of agriculture to China's GDP has declined significantly. ...read more.

We may be obtained at the expense of the environment of high growth, this is a poor quality of the GDP. Environment, ruining the future of our children to spend money to governance, which mean that we borrowed the money of future generations engaged in GDP, in the future to repay the debt.This GDP components to contain false, obviously not a good GDP. Fifth, are there many people are unemployed? Comparison of China and the U.S., China talk about how much GDP growth, do not ask the unemployed; U.S. GDP growth in the number of do not ask, just ask the unemployment rate. U.S. GDP growth has now returned to normal, but the unemployment rate over 9%. So that the economic crisis is not over yet. In China, the unemployment rate is simply no statistical data, local officials just to high GDP growth. Our future in the pursuit of GDP, should be concerned about its quality. ...read more.