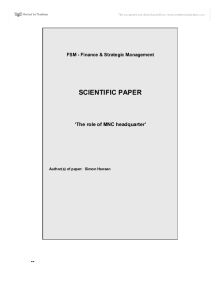 The role of MNC headquarter

This might be a temptation to some leaders, as this gives them the opportunity to be present, virtually, in every part of the world. But this is dangerous, as the decentralization is the right way towards a corporation that is able to react and adapt to changes in the global and local market. Conclusion The relationship between headquarter and its subsidiaries can be described by governance mechanisms, centralization, formalization and normative integration. These describe how headquarters acts towards the subsidiary and thereby what role headquarters has in the organization. Previously multinational corporations was very centralized and formalized, thus giving headquarters a very important role in the corporation. The HQ was at the top in decision making, which had the effect that the corporation was not in a condition where it easily can react to changes in local markets. Corporations are going towards a more normative integration-approach towards headquarters role in the organization. The main difference between previously and present is that corporations nowadays are more capable of reaction to changes in local markets. Instead of directly making the decision in headquarters, now international managers are trained and socialized with common goals, values and beliefs. This creates an indirect decision making by the headquarter, as they have trained the managers who now makes decision according to local needs and changes. Corporation will be even more decentralized, thus giving the subsidiaries more responsibility and the ability to react to local changes. Furthermore technology, specifically communication, will move corporations towards the virtual organization. Here decision making can be coordinated across borders, due to instant communication throughout the organization. ...read more.