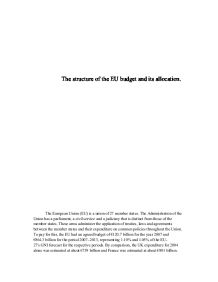 The structure of the EU budget and its allocation

The structure of the EU budget and its allocation. The European Union (EU) is a union of 27 member states. The Administration of the Union has a parliament, a civil service and a judiciary that is distinct from those of the member states. These arms administer the application of treaties, laws and agreements between the member states and their expenditure on common policies throughout the Union. To pay for this, the EU had an agreed budget of �120.7 billion for the year 2007 and �864.3 billion for the period 2007-2013, representing 1.10% and 1.05% of the EU-27's GNI forecast for the respective periods. By comparison, the UK expenditure for 2004 alone was estimated at about �759 billion and France was estimated at about �801 billion. The Administration of the European Union has three elements to its government: the Council of Ministers, the European Commission and the European Parliament. In addition, the European Court of Justice is funded from the budget of the Administration. All three take a part in setting the annual budget. The budget for a year, or period of years, is determined in advance, but final calculations of payments required from each member state are not completed until after the budget year is over and information about revenue and expenditure is available. The UK rebate is one of the last elements of the budget to be calculated (though it is estimated in advance) as it depends upon the balance of all EU revenue to and from the UK. Overall structure of the EU budget The budget consists of: * General revenue * Revenue and expenditure by section: o Section I - Parliament o Section II - European Council and Council o Section III - Commission o Section IV - Court of Justice o Section V - Court of Auditors o Section VI - Economic and Social Committee o Section VII - Committee of the Regions o Section VIII - European Ombudsman o Section IX - European Data Protection Supervisor o Section ...read more.