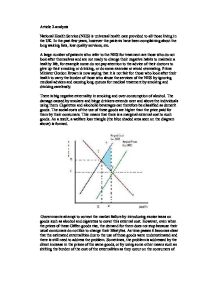 There is big negative externality in smoking and over-consumption of alcohol. The damage caused by smokers and binge drinkers extends over and above the individuals using them.

Article 2-analysis National Health Service (NHS) is universal health care provided to all those living in the UK. In the past few years, however the patients have been complaining about the long waiting lists, low quality services, etc. A large number of patients who refer to the NHS for treatment are those who do not look after themselves and are not ready to change their negative habits to maintain a healthy life, for example some do not pay attention to the advice of their doctors to give up their smoking or drinking, or do some exercise or avoid overeating. Prime Minister Gordon Brown is now saying that it is not fair for those who look after their health to carry the burden of those who abuse the services of the NHS by ignoring medical advices and causing long queues for medical treatment by smoking and drinking carelessly. There is big negative externality in smoking and over-consumption of alcohol. ...read more.

Sometimes, the problem is addressed by the direct increase in the prices of the same goods, or by using some other means such as shifting the burden of the cost of the externalities as they occur on the consumers of the goods, such as by asking the consumers of these goods to pay for the cost of the medical treatment they receive due to their loss of health by abusing these goods. 364,000 patients are admitted to NHS hospitals each year due to smoke-related diseases. Some 1.7bn pounds is spent every year to treat diseases caused by smoking, such as lung cancer, bronchitis and emphysema. The NHS spends a similar amount on alcohol-related diseases such as cirrhosis. The number of patients suffering from cirrhosis has tripled in the past decade. The government has certainly attempted to encourage a better lifestyle in the country in the same period. ...read more.

It is unfair to those who take responsibility for their health to wait as long as those who carelessly drink and smoke. In a survey among 870 families and hospital doctors, almost 60 per cent believed that NHS could not provide full healthcare to everyone and that some individuals should pay for the services they receive. In my opinion, the first step for the government is to wipe out the information failure within the society, using media such as magazines, newspapers and TV programmes. The second step could be providing incentives to those who quit drinking and smoking or to those obese patients who make an effort to lose weight through diet or by going to gym. If none of these works, then it may be the time for the government to take action by cutting spending on those patients who opt not to take responsibility for their actions or inactions. ...read more.