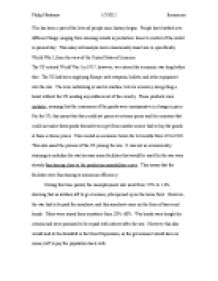 This essay will analyze how economically smart war is, specifically World War I, from the view of the United States of America

﻿Philip Madonna 1/5/2012 Economics War has been a part of the lives of people since history began. People have battled over different things, ranging from roaming rounds in prehistoric times to control of the world in present day. This essay will analyze how economically smart war is, specifically World War I, from the view of the United States of America. The US entered World War I in 1917; however, we entered the economic war long before that. The US had been supplying Europe with weapons, bullets, and other equipment into the war. ...read more.

This created an economic boom for 44 months from 1914-1918. This also eased the process of the US joining the war. It was not as economically straining to mobilize for war because some facilities that would be used for the war were already functioning close to the production possibilities curve. This means that the facilities were functioning at maximum efficiency. During this time period, the unemployment rate went from 7.9% to 1.4%, showing that as soldiers left to go overseas, jobs opened up on the home front. ...read more.

In my opinion, war has a greater value than the debts it creates. It is about ?flexing your military muscles? to make sure order is kept in the world. Some of the things that soldier?s lives are lost for are found many years later in the forms of our rights and freedoms and do not have a value that can be expressed in dollars and cents. Because these do not have prices, it is a personal opinion weather a war is economically worth the risk. However, I feel that it is worth being able to live the life that I have now than suffer under laws enforce upon our country by the would-be conquers of my homeland. ...read more.