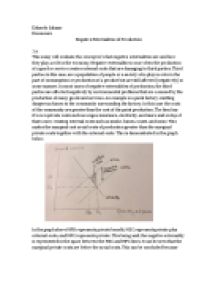 This essay will evaluate the concept of what negative externalities are and how they play a role in the economy.

﻿Eduardo Salazar Economics Negative Externalities of Production 1 a. This essay will evaluate the concept of what negative externalities are and how they play a role in the economy. Negative externalities occur when the production of a good or service creates external costs that are damaging to third parties. Third parties in this case, are a population of people or a society who play no role in the part of consumption or production of a product but are still affected (negatively) in some manner. In most cases of negative externalities of production, the third parties are affected negatively by environmental problems that are a caused by the production of many goods and services. An example is a paint factory emitting dangerous fumes to the community surrounding the factory. In this case the costs of the community are greater than the cost of the paint production. The firm has it?s own private costs such as wages, insurance, electricity, and more and on top of that is now creating external costs such as smoke, fumes, waste, and noise. ...read more.

This as a whole is how negative externalites of production function. In summery, the concept occurs when a factory obtains external costs such as smoke, waste, and noise that all effect third parties negatively. As a result, the producer is not producing a socially efficient output (QePe). It then results in market failure (over production at a low price) and welfare loss; while profit-seeking companies continue to only take account for their private costs. The producer is then making a profit while the third parties lose money. It is at this stage the government has to step in. b. One of the policies that a government could add to avoid market failures is to enforce taxes. This will minimize the welfare loss as indicated on the graph above. The government is able to minimize welfare loss with taxes by taking money and making changes for eliminating the negative externalities. The government is then able to increase the producer’s private costs which causes the MPC to move upwards as indicated above (MPC ï MPC + Tax). ...read more.

It could also produce non-consumption. Finally, the cost of setting such standards and policies could costs more than the costs of pollution. Conclusively, the government could issue tradable emission permits. This is a market-based solution to negative externalities of production. These permits issued by the government allow companies to produce pollution to a certain level (quota). Once a company is issues one, they have the right to buy, sell, and trade the permits on the market (cap and trade system). This then promotes initiative for companies to produce less pollution. If they produce over the set amount they must buy a tradable emission permit from another firm, raising its costs. Visa versa if they produce less pollution then amount issued the firm is allowed to sell their permit. This becomes an issue that does not really do much. The pollution remains and corruption among companies arises. Further, it is difficult to measure a factories pollution output. Below are examples of how firms can use these permits efficiently (right) and inefficiently (left). Notice the difference in the welfare loss (shaded in area). This is the basic concept of how negative externalities of production arise and some of the solutions available to minimize them. ...read more.