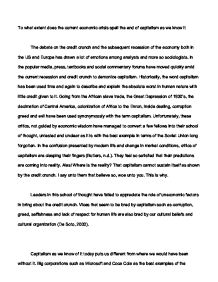 To what extent does the present economic crisis spell the end of capitalism as we know it?

To what extent does the current economic crisis spell the end of capitalism as we know it The debate on the credit crunch and the subsequent recession of the economy both in the US and Europe has drawn a lot of emotions among analysts and more so sociologists. In the popular media, press, textbooks and social commentary forums have moved quickly amid the current recession and credit crunch to demonize capitalism. Historically, the word capitalism has been used time and again to describe and explain the absolute worst in human nature with little credit given to it. Going from the African slave trade, the Great Depression of 1930's, the decimation of Central America, colonization of Africa to the Enron, inside dealing, corruption greed and evil have been used synonymously with the term capitalism. Unfortunately, these critics, not guided by economic wisdom have managed to convert a few fellows into their school of thought, untested and unclear as it is with the best example in terms of the Soviet Union long forgotten. In the confusion presented by modern life and change in market conditions, critics of capitalism are clasping their fingers (Butters, n.d.). They feel so satisfied that their predictions are coming into reality. Alas! Where is the reality? That capitalism cannot sustain itself as shown by the credit crunch. I say unto them that believe so, woe unto you. ...read more.

As such, the commoner such as you and me have been benefiting from such through education, good roads and Medicare and other government sponsored programs (De Soto, 2000). Has it ever hit you then that the capitalist market system that you are so ready to bash has been keeping you on the road has it ever occurred to that the government itself has been seeking bail outs from capitalists? While you might not be in the know or have just chosen to ignore it, private companies such as Marilyn Lynch, AIG and others that have sought government bailout in the recent past have been very good business partners with the government through the government bonds market. Dos it occur to you then that the fact that there seems to be a problem with one of the partners that the relationship is over? No, the government has stepped in and capitalism will rise again more than ever. In a capitalist market where government has no role to play in any of the markets, market forces are expected to maintain equilibrium. In the US and the UK and across majority of countries, the government imposes rules and regulation to guide money markets plied by banks, mortgage companies and other financial institutions. As such, the government interferes with the law of demand and supply in that market. Therefore, incase of government failure in regulating the market then the market is thrown into disarray as the situation is as of now. ...read more.

The view held by those calling for a review of the system and in their wishes the abolition of capitalism to avert another recession and credit crunch completely ignores the social impact of the so called socialist ideology. In this, I would like to draw your attention to some of the basic human rights. On of them that many of you value a lot yet are against capitalism is the right to own property. By phasing out capitalism, it would seem that the government will take every thin g from the commoner and the rich and redistribute everything. Is this the way forward? Even Cuba, a country that has long in the past prevented her people to own mobile phones and computers, in the guise of a socialist oriented system in fear of capitalism moving away from the practice. Now an unfavorable economic phase will lead us into denying all the progress made through capitalism? (De Soto, 2000) Capitalism has survived two world wars and the Great Depression. It won the Cold War. Why would it then be viewed as obsolete after seeing the world through a tumultuous 21st century? In this view, I profoundly and strongly feel that the idea alone that the current economic crisis spells the end of capitalism as we know it is not only wrong but misplaced and denies human progress in the last few centuries. As such, capitalism will again prove strong and lead us into a better economic and social position. ...read more.