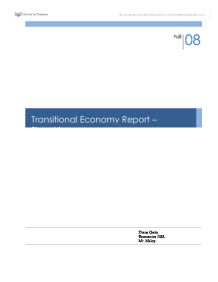 Slovakia's economy can be defined as one of a developed country since it has the highest sustained GDP growth in the European Union. In 2007 the GDP growth was of 10.4% but has lately fallen considerably to 4.7 in 2009 as an effect to the economic crisis. The secret of this economy's success is that it is small and open. If we look back at the economic history of the Slovak government we can see that there are two main approaches, which usually give results. The first one it is more probable to be known as populist and most of the time it is associated with a strong opposition towards investors, high levels of corruption, mismanagement and incompetence. ...read more.

This kind of politicians is usually inclined towards transforming a communist economy into a free market economy. The best Soviet economic period was between 1990- 1992 and 1998-2006 because there was falling of inflation and unemployment, acceleration of economic growth and an improvement in public finances. The economic growth would have not been possible if it wasn't for the structural reforms which also had a negative effect, this was on the people with a mediocre income and it led to a dislike of the government by the people. Here is where the government introduced the flat tax, which was one of 19% rate for income tax, Vat and corporation tax. ...read more.

These simple and low taxes helped placed Slovakia in the attention of foreign investments, which lead to the growth of entrepreneurism. This success can be easily seen in the graphs below: The rise of exports was a real push to the Slovak economy and increased the employment and wages. Thus the consumption of households increased and as an effect the rate of imports grew. Therefore dramatic rise in exports was mirrored by rapid rise in imports. By having foreign investors creating projects, thousands of jobs were created directly and indirectly. This made the unemployment rate fall from 20 % in 2001 to about 9% in 2008. Yet, the rapid economic growth the explosion of exports between 2002 and 2007 did not overheat the economy and raise inflation. ...read more.