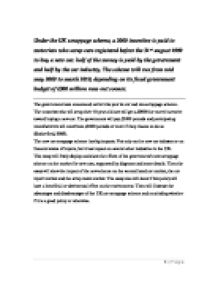 UK Car Scrappage Scheme. This essay will firstly display and show the effects of the governments new scrappage scheme on the market for new cars, supported by diagrams and some details. Then the essay will show the impact of the new scheme on the

Under the UK scrappage scheme, a 2000 incentive is paid to motorists who scrap cars registered before the 31st august 1999 to buy a new car. half of the money is paid by the government and half by the car industry. The scheme will run from mid may 2009 to march 2010, depending on its fixed government budget of �300 million runs out sooner. The government have announced earlier this year its car and van scrappage scheme. The motorists who will scrap their 10-year-old cars will get a �2000 (or more) incentive toward buying a new car. The government will pay �1000 pounds and participating manufacturers will contribute �1000 pounds or more if they choose to do so (Rutherford, 2009). The new car scrappage scheme has big impacts. Not only on the new car industry or on financial status of buyers, but it has impact on several other industries in the UK. This essay will firstly display and show the effects of the government's new scrappage scheme on the market for new cars, supported by diagrams and some details. Then the essay will show the impact of the new scheme on the second hand car market, the car repair market and the scrap metal market. The essay also will show if this policy will have a beneficial or detrimental effect on the environment. ...read more.

That means more people will have better and more modern cars. Also recently the government have declare that they will invest an extra � 100 million pounds which will hopefully help another 100,000 car to get scrapped and their owners get a � 2000 toward a new car which will make a total of 400,000 cars being scrapped and � 400 million being spent by the government and 400,000 new cars in the streets. (direct.gov.uk, 2009) And if 400,000 new car extra being sold means that the policy helped British (and European) manufacturers to sell more cars and gain more profit after the crisis. Also means that they will secure more repair jobs for those people who bought new cars in the upcoming months and years. And one of the big advantages is that by replacing 400,000 old cars by new cars we reduce the gas emissions, which are the main cause of the global warming. To sum up, in my opinion, the government's car scrappage scheme has been a successful project and it helped many people to replace their old cars with new better once. Also it helps many industries and car dealers to go out of rescission. Even though that some other firms have suffered from it, I would say that it is a vital project, good for car buyers, car dealers and other attached firms and of course first of all, it is good for the environment. ...read more.