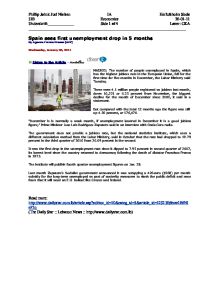 Spain sees first unemployment drop in 5 months By Agence France Presse (AFP) Wednesday, January 05, 2011 Listen to the Article - Powered by MADRID: The number of people unemployed in Spain, which has the highest jobless rate in the European Union, fell for the first time for five months in December, the Labor Ministry said Tuesday. There were 4.1 million people registered as jobless last month, down 10,221 or 0.25 percent from November, the biggest decline for the month of December since 2000, it said in a statement. But compared with the total 12 months ago the figure was still up 4.50 percent, or 176,470. "December is is normally a weak month, if unemployment lowered in December it is a good jobless figure," Prime Minister Jose Luis Rodriguez Zapatero said in an interview with Onda Cero radio. The government does not provide a jobless rate, but the national statistics institute, which uses a different calculation method from the Labor Ministry, said in October that the rate had dropped to 19.79 percent in the third quarter of 2010 from 20.09 percent in the second. ...read more.

Recession is defined as a period of economic decline, usually accompanied by a drop in stock, increase in unemployment, and a decline in housing market. Aggregate demand is the sum of all demand in an economy, and can be calculated by using gross domestic product (GDP) of a country, and is represented by the formula: (AD) = C + I + G (X-M). This graph illustrates some of the effects of the recession on a country's economy. As shown aggregate shifts from AD to AD1, this is because the consumers are spending less money during the recession period making the demand on products less, also this moves the equilibrium from E1 to E2, causing a movement along the supply curve. When people are buying less goods, firms are not required to produce as many goods, meaning that less work is required and causing unemployment in most cases. As the graph illustrates DL (Labour demanded) shifts left to DL1, because of the firms and companies not needing as much work force as before. ...read more.