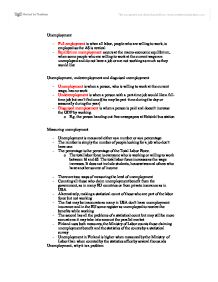 Unemployment - measurement, different types and the problems caused by unemployment

be more accurate as it may take into account the parallel market - Finland uses both measures; the Ministry of Labor counts those claiming unemployment benefit and the statistics of the counts by a statistical survey - Unemployment in Finland is higher when measured by the Ministry of Labor than when counted by the statistics office by several thousands Unemployment, why it is a problem - It is inefficient because scarce resources of labor are not being used - Labor that could be producing goods or services to meet our infinite wants is idle, and so AD is lower than necessary - Keynesian theory points out than unemployment causes negative externalities, crime, ill-health etc. - Other social problems at unemployment may include depression and other problems in society (e.g. poverty) - N.B. The social problems are only a result of unemployment if the unemployed are involuntarily unemployed. ...read more.