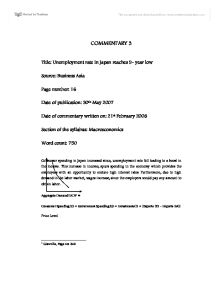 COMMENTARY 3 Title: Unemployment rate in Japan reaches 9- year low Source: Business Asia Page number: 16 Date of publication: 30th May 2007 Date of commentary written on: 21st February 2008 Section of the syllabus: Macroeconomics Word count: 750 Consumer spending in Japan increased since, unemployment rate fell leading to a boost in the income. This increase in income, spurs spending in the economy which provides the employees with an opportunity to endure high interest rates. Furthermore, due to high demand in the labor market, wages increase, since the employers would pay any amount to obtain labor. Aggregate Demand (AD)1 = Consumer Spending(C) + Government Spending(G) + Investments(I) + [Exports (X) - Imports (M)] Price Level Thus with the increase in any of these components, the aggregate demand would also increase, here we see the autonomous expenditure is Investments and along with it even Consumer Spending is increasing; leading to the shift of the AD to the right. ...read more.

Due to this, the investors withdrew or reduced bonds and investments afraid that the value of their money would reduce and they would receive lesser than they had invested initially. This in turn, enabled the Bank of Japan to utilize their monetary policy of interest rates, an increase in it would act as a corrective measure for the speculated inflation, since, due to high interest rates, consumers would be tempted to save; which would reduce consumer spending. Consumer Spending being a component of Aggregate demand would result in reducing aggregate demand since AD = C + G + I + (X - M). Thus with the decrease in investments and consumer spending, the aggregate demand would also decrease. Subsequently, aggregate demand would shift to the left, reducing prices automatically, eliminating inflation. Price Level AD1 AD2 O Real GDP However, the Phillips Curve3 contradicts how inflation can be eliminated through their low unemployment rates. ...read more.

Moreover, their unemployment rate falling has not shown all its positive effects yet; the high demand for labor is supposed to indirectly increase growth of the country. However, retiring employees are being substituted by younger employees, who are willing to work for less wages, due to which the wage growth has not begun yet. In addition to this, there is a great utilization of part time workers, who are paid normally just hour wise, this type of pay does not encourage any kinds of wage spurs! And lastly, since companies want to keep labor costs low, it would affect the fact that the demand for labor wouldn't be too high, nor would there be a sudden increase in wages, as wages are a critical element of their costs. Therefore, Japan is definitely on the right track, but should be careful about avoiding inflation and remember that slow and the steady wins the race. 1 Glanville, Page no: 245 2 Glanville, Page number: 265 3 Glanville, Page number: 308 ?? ?? ?? ?? ...read more.