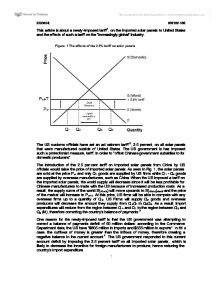 US Tariff On Solar Panels

This article is about a newly-imposed tariff1, on the imported solar panels to United States and the effects of such a tariff on the "increasingly global" industry. The US customs officials have set an ad valorem tariff2, 2.5 percent, on all solar panels that were manufactured outside of United States. The US government is has imposed such a protectionist measure, tariff, in order to "offset Chinese government subsidies to its domestic producers". The introduction of the 2.5 percent tariff on imported solar panels from China by US officials would raise the price of imported solar panels. As seen in Fig. 1, the solar panels are sold at the price Pw and only Q1 goods are supplied by US firms while Q1 - Q4 goods are supplied by overseas manufacturers, such as China. ...read more.

In this case, the outflows of money is greater than the inflows of money, therefore creating a negative balance in the current account4. The US government responded to this current account deficit by imposing the 2.5 percent tariff on all imported solar panels, which is likely to decrease the incentive for foreign manufacturers to produce, hence reducing the country's import expenditure. It is also possible that the US is only trying to gain government revenues from such a protectionist measure, which is the 2.5 percent tariff with other punitive measures for specific companies. The ruling claimed that a solar panel from Trina Solar is to be classified as a generator because it contained a diode, which is required on a solar panel in order to meet the US safety standards. ...read more.

In the long run, however, US government will have to rectify the low cost of labors in exporting countries, which is the actual cause of the deficit. The US government can achieve this by either producing the solar panels at an efficient level or lowering the capital cost of the solar panels, if not the labor cost. 1234 1 Tariff is a tax levied on imported goods, which can be both an ad valorem tax or a specific tax 2 Ad valorem tariff is a tax which is a percentage of the import price 3 Balance of payments is an account of all the monetary dealings a country has with other countries and basically accounts for all money flows across the border during a period of time 4 Current account shows export revenue and import expenditure of a certain country ECON HL 002162-106 ECON HL 002162-106 1 1 ...read more.