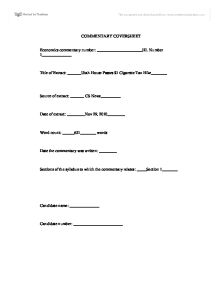 and SMB (Social Marginal Benefit). The private marginal costs is the price an individual has to pay to get one more unit of the product and the private marginal benefit is the profit the individual gets from one more unit. These costs and benefits often are very different from the social marginal cost, which is the cost the society pays for one ore unit of the good, and the social marginal benefit, which is the society's benefit from one more unit. This difference is the cause of market failure, because the market fails to account for the costs society has to bear and the benefits it can get from the goods. This is where the government has to step in. The government imposes taxes to reduce the bought amount of goods, which have negative externalities and subsidies, which are money paid to businesses to encourage production and consumption of goods with positive effects on society. The externality mentioned in this article is the negative externality of passive smoking. In a perfect market QS cigarettes would be sold at a price of PS. ...read more.

When a tax is imposed, this will effectively contract supply, because it will increase the price producers are willing to sell their goods at. The red rectangle represents the governments tax revenue. Due to the low PED of cigarettes, the price increases by a lot (from P to P2), while quantity sold barely changes (Q to Q2). This difference leads to a large consumer share of the tax, meaning that most the tax will be payed by the consumers rather than by the producers. The government uses this fact to increase their tax revenue, which is the total money the government earns from taxes. When they impose a tax on a good with inelastic demand, the revenue will increase. In the article it looks like the government assumes the cigarettes to be perfectly inelastic in demand, because it mentions that the revenue increase has never been as much as anticipated, because even though only few people stop smoking, there are still people who will stop smoking. This means that the government revenue is not increased by as much as expected, but also that there are less smokers, which counters the negative externality. ...read more.