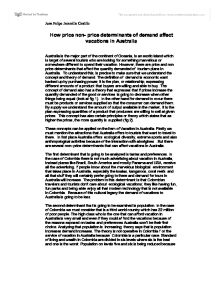 How price non- price determinants of demand affect vacations in Australia Australia is the major part of the continent of Oceania, is an exotic island which is target of several tourists who are looking for something marvellous or somewhere different to spend their vacation. However, there are price and non price determinants that affect the quantity demanded of tourism plans in Australia. To understand this, is precise to make sure that we understand the concept and theory of demand. The definition of demand is economic want backed up by purchasing power, it is the plan, or relationship, expressing different amounts of a product that buyers are willing and able to buy. The concept of demand also has a theory that expresses that if prices increase the quantity demanded of the good or services is going to decrease when other things being equal (look at fig 1). In the other hand for demand to occur there must be products or services supplied so that the consumer can demand them. By supply we understand the amount of output available in the market, it is the plan expressing quantities of a product that producers are willing to sell at given prices. This concept has also certain principles or theory which states that as higher the prices, the more quantity is supplied (fig 2). ...read more.

afford to buy vacation to Australia the increase in population would not affect the demand unless enormous discounts are made so that people of level four can buy them. Income is also something that could affect the quantity demanded for vacations in Australia. If people earn more and the price of vacations in Australia is kept the same the quantity demanded is going to increase because people are now earning more money so they can spend the extra resources on more expensive place for vacations such as Australia. This in the case of high people because poor people have to use that extra money to solve other problems rather than vacation. Now we are going to evaluate if price of relative goods affect quantity demanded for vacations in Australia. In this case the relative goods that must be considered should be vacation but in other place instead of Australia. This will surely affect demand considering that for vacation; the culture in Colombia is that the further you travel the better the vacations are. So if vacations to the United States and to Australia are at the same price, the consumer will choose to enjoy his vacation in Australia just for the fact is further from Colombia. But as the theory says: if the relative price of a substitution good is smaller, the consumer will substitute the expensive service for the cheaper one so the consumer will choose to go to the United States in vacation if its cheaper than Australia and vice versa. ...read more.

The ones which increase the quantity demanded are price of relative goods, income and enormous changes in future expectation of prices. The first one of them is because if the consumer has the choice to go to Australia or some where nearer for the same price, he will choose Australia because is further away and can go to there for the same price as a nearer place. In the case of income the quantity demanded is going to increase because now people with high acquiring power can spend their extra money on more expensive vacations such as vacations in Australia. The last one of them is because if the price is going to increase severely, people will buy it more before the price goes up. Whenever any of these determinants occur there is a shift to the right side in the demand curve (fig 4). In the other hand, there are determinants that reduce quantity demanded. This is the case of travel and transportation because if there is not a direct flight from Colombia to Australia, the vacations become less pleasant and consumers don't like that. Instead they buy more pleasant vacations for the same price as holidays in Australia so this will reduce the demand of them. When this happens there is an inward shift on the demand curve (fig 5). Also there are other determinants that don't affect vacations in Australia. These determinants are: taste and preferences, population and small changes in future expectations of relative price. ...read more.