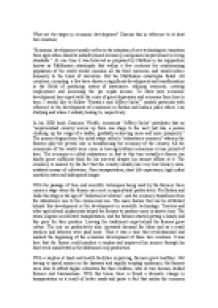 What are the stages in economic development? Discuss this in reference to at least two countries.

﻿What are the stages in economic development? Discuss this in reference to at least two countries. ?Economic development usually refers to the adoption of new technologies, transition from agriculture-based to industry-based economy, and general improvement in living standards.? At one time it was believed as proposed by Malthus in his supposition known as Malthusian catastrophe that within a few centuries the mushrooming population of the world would consume all the food resources, and would reduce humanity to the brink of starvation. But the Malthusian catastrophe failed. All countries, excepting, a few have shown a significant development and transformation in the fields of producing means of sustenance, utilizing resources, creating employment and increasing the per capita income. To show how economic development has coped with the crisis of great depression and recession from time to time, I would like to follow ?Ruston?s and Jeffrey Sachs?? models particular with reference to the development of economies in Britain and India-a place where I am studying and where I initially belong to, respectively. In his 2008 book Common Wealth, economist ?Jeffrey Sachs? postulates that an ?impoverished country moves up from one stage to the next just like a person climbing up the rungs of a ladder, gradually achieving more and more prosperity.? The journey begins from the initial stage called a "subsistence economy" wherein the farmers play the pivotal role in transforming the economy of the country. ...read more.

Highways, runways, the network of railways, the use of satellites, wireless communication proves very conducive to the economy, and the economy blooms. Foreign investment and international trade rises, the term ?multinational? ?global? replaces the national and indigenous, and the economy soon becomes prospering. The initial boost in wealth is like a seed, which, once planted, is able to be self-sustaining and grow into a mighty tree on its own. Since India had long been colonized by Britain, there were widespread effects on its economy. The colonizers were more concerned about their profits even at the cost of exploiting the other nations. But after the World War II India was declared independent. The result is evident. Indian economy is still developing while that of Britain is developed. ECONOMIC DEVELOPMENT IN BRITAIN The graph above shows that the economy of Britain has also undergone rise and fall from the years 1979 to 2012. But the graph is most significant in showing that the economy took a boos from the year 2009 where it was it its ever lowest. Macintosh HD:Users:rahulgautam:Desktop:uk-econ-growth-1980-2012-1024x703.png As per Reuters, April 3, 2014, ?Britain's dominant services sector expanded steadily in March, pointing to solid economic growth in the first quarter, even though the rate of expansion was the slowest since last June and hiring eased, a survey showed on Thursday.? The index is stable considerably above 50 marks that denote a tremendous rise in growth and development of the UK economy. ...read more.

months, driven largely by growth in new business orders and an improved macroeconomic situation.? Unlike the UK inflation has been a serious problem in the Indian economy and as a result the Reserve Bank of India raised the key policy rate by 0.25 per cent to 8 in its bid to control inflation. Macintosh HD:Users:rahulgautam:Desktop:g_essay_web.jpg There has been a tremendous growth in the Indian manufacturing sector also. The graph above shows clearly how the period ending 1981-2013 is an indicator of the growth of Indian economy over the years. In a survey undertaken by The Hindu, it is expected that ?improved economic performance may help generate about 3.2 million additional jobs.? The year 2014 may be a further turning point in Indian economy as election have been scheduled all over the country. The political parties are coming up with different agendas and propagandas. As per the economists, this even may mark ?The revival of manufacturing sector through greater emphasis on infrastructure development and by rationalization of labor laws.? Another survey conducted by Manpower Group indicates, ?India has emerged as the most optimistic nation in terms of hiring plans and sectors such as aviation, IT & ITeS.? Since India and Britain share history between them during colonization, and foreign trade after Indian independence, there is seen a mutual growth in their respective economies. The graph below shows how there has been an increasing trend in the imports and exports of the two countries. Macintosh HD:Users:rahulgautam:Desktop:india_uk_trade_dec12.jpg ...read more.