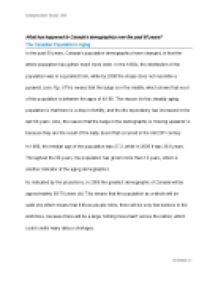 What has happened to Canada's demographic over the past 50 years? What are the effects on employment?

﻿Independent Study Unit IMPACT OF CHANGING DEMOGRAPHICS What has happened to Canada?s demographics over the past 50 years? The Canadian Population is Aging ________________ In the past 50 years, Canada?s population demographics have changed, in that the whole population has gotten much more older. In the 1950s, the distribution of the population was in a pyramid form, while by 2006 the shape does not resemble a pyramid. (see Fig. I) This means that the bulge is in the middle, which shows that most of the population is between the ages of 40-60. The reason for this steadily aging population is that there is a drop in fertility, and the life expectancy has increased in the last 50 years. Also, the reason that the bulge in the demographic is ?moving upwards? is because they are the result of the baby boom that occurred in the mid 20th century. In 1956, the median age of the population was 27.2, while in 2006 it was 38.8 years. Throughout the 50 years, the population has grown more than 10 years, which is another indicator of the aging demographics. As indicated by the projections, in 2056 the greatest demographic of Canada will be approximately 60-70 years old. This means that the population as a whole will be quite old, which means that if these people retire, there will be very few workers in the workforce, because there will be a large ?retiring movement? across the nation, which could create many labour shortages. ...read more.

This means that being productive depends on your personality rather than your age. As long as older employees are healthy and know how to operate standard technology, they can be smart as well as productive. ________________ ISSUES IN AN OLDER WORKFORCE What are some issues that need to be addressed in a workforce with older employees? Issues in the Workplace ________________ First of all, the term ?older employee? needs to be defined. According to the Canadian Centre for Occupational Health and Safety, ?There is no exact, commonly recognized age at which someone is considered an older worker. Some studies have focused on people older than 55, while other studies examined those 45 years or older.? Older workers might need special accommodations, but not specifically for older workers. For example, a company may provide personalized workstations and job tasks which are best suited to one employee?s ability, but this does not mean they have to address older employees differently. However, older employees may need certain requirements to be able to work efficiently, comfortably, and safely. Regarding health and safety concerns, older employees have a few extra concerns that should be addressed. Even though older workers usually experience fewer accidents/injuries, they can still get injured. When they do become injured, it can be much more severe than if it would have happened to a younger employee. Also, it can take much longer for an aging employee to heal than a younger employee. ...read more.

If workers do not enjoy their job and are unsatisfied with it, it can promote early retirement and/or quitting of the job. An easy way to solve this problem is to have colleague/peer evaluation forms, as well as group surveys issued by the manager. This will allow the manager to understand how employees feel, and what the manager can change to create a pleasant work environment. Some corporations do not tell the employee what is expected of them, and what they can do to grow as an employee. Offering a employee policy handbook will let employees know what exactly they have to do every time they come to work. Also, having information about promotions with job descriptions, along with evaluations and salary is quite beneficial, as it allows employees to strive further to become a better employee, to result in a promotion. This can create a very motivation workplace, which enhances the environment overall. A common problem with some companies is that they do not offer various types of training and they do not have it often. This can cause employees to work inefficiently, and not do what they are supposed to do, which can have a negative effect on the company as a whole. Therefore, it is important to offer various types of training such as 1 on 1, online, or even through media such as a DVD. This will target the largest amount of potential employees, and it can cater to every individual?s needs. Having different methods of training can allow individuals to learn properly and efficiently, thus improving the success of the company. ...read more.