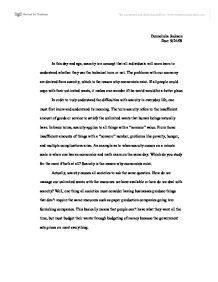 Donnelisha Jackson Due: 9/24/09 In this day and age, scarcity is a concept that all individuals will soon learn to understand whether they use the technical term or not. The problems with our economy are derived from scarcity, which is the reason why economists exist. If all people could cope with their unlimited wants, it makes one wonder if the world would be a better place. In order to truly understand the difficulties with scarcity in everyday life, one must first know and understand its meaning. The term scarcity refers to the insufficient amount of goods or service to satisfy the unlimited wants that human beings naturally have. ...read more.

Well, one thing all societies must consider having businesses produce things that don't require the same resources such as paper production companies going into furnishing companies. This basically means that people can't have what they want all the time, but must budget their wants through budgeting of money because the government sets prices on most everything. Anyway, different countries deal with poverty through different economy systems. One economy system is called pure market system where there are no controlling powers on what happens economically, the resources are privately owned, and prices are created to regulate the system. The other common way is through pure command economy, which is opposite pure market economy and deals with publicly owned resources and centralized planning. ...read more.

Publicly owned businesses include fast food restaurants where shares can be bought (etc.) while private are like electrical companies. An example of the second is when an economy shuts most out of competition because their resource whereabouts and connections are discreet and this used to be ATT a long time ago as an example. The third is practiced not by the U.S. in particular, but it possesses some qualities with central powers that the U.S. agrees on. All in all, scarcity is a problem for us all or at least anyone that wants for more than one thing, but these problems can be overcome and managed. If they are neglected then the well being of the citizens within the economy begin to transition their methods of dealing with scarcity. These economic systems are effective ways of dealing with scarcity to regulate or decrease poverty. ...read more.