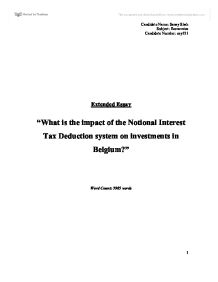 What is the impact of the Notional Interest Tax Deduction system on investments in Belgium?

Extended Essay "What is the impact of the Notional Interest Tax Deduction system on investments in Belgium?" Word Count: 3985 words Table of Contents Title Page Number(s) 1. Abstract 3 2. Acknowledgements 4 3. Introduction 5 - 6 4. Benefits of the NITDS 7 - 11 5. The balance between Debt and Equity financing 12 - 14 6. Drawbacks of the NITDS 15 - 16 7. International Awareness 17 - 19 8. Changes encountered in statistics 20 - 21 9. Other reasons for investing in Belgium 22 - 23 10. Conclusion 24 - 25 10.1 Conclusion 10.2 New Questions 10.3 Limitations 11. Bibliography 26 12. Appendices 27 - 32 1. Abstract My Extended Essay was based on the innovative tax system that had newly been launched in Belgium for companies to gain greater possibilities of making larger profits. With the recent recession looming over all financial markets and companies, I felt it was interesting to see what the effect of this tax regime, which benefits companies, would have on investments in Belgium. Since the tax system was first to be established in Belgium, by investigating the effect on investments, it would be easier to suggest to countries worldwide whether they should adopt the tax system in order to compete with the developing economies of Brazil, India, China and Russia (BRIC countries.) The investigation was conducted thoroughly, and firstly I interviewed Mr Steven Gils and Dirk Eilers who are tax specialists in order to understand the system. To evaluate whether the tax system was actually benefiting the economy, I looked at the statistics issued by the National Bank of Belgium along with other publications by banks and other countries in order to conclude how effective the new tax regime was. In order to focus my study on the investments in from America, I discussed the issue with Marcel Klaes. By looking at the statistics as well as economic ideas, I could deduce that investment in Belgium has increased after the introduction of the NITDS. ...read more.

The effect can be seen in Figure 4. We must understand that in this simulation, each company's profits before taxes and financial expenses are equal at �100. When Company A allocates all the money to interest payments, the private Belgian investor will receive a final interest income of �85 (100 minus 15% withholding tax.) However, when Company B finances entirely out of its own resources, a deduction cannot be obtained and so normal tax rates of 33.99% (approximately 34%) apply, thus leaving profits after tax at �66. The sum that the private investor will receive depends on whether dividends are issued or not. If dividends are issued, the private investor will receive �49.5 due to a 25% withholding tax. Conversely when dividends are not issued, the individual will obtain all the profit after tax, �66.00, since capital gains are not taxed in Belgium. This brings the conclusion that a company should primarily finance through debt, then equity without issuing dividends and finally equity financing with the issuing of dividends. However, there is a difference when a borrower firm is financed through another company, for example by a "parent company." Even though, the order in which one should finance changes, the amount that is received changes marginally in some cases as well as a large amount in other cases. For example, when Company A receives funds from Company C (parent company) the whole of the interest will be taxed and therefore the Company will receive �66, whereas when it is not financed through the parent company the individual will have �85. Conversely, for Company B there will be an increase in earnings instead of a decrease. This is because only 5% of the dividends paid will be taxed and therefore the profit remaining after taxation will be �98.3 instead of �75. This conveys that after the introduction of the NITDS the Belgian government will have a reduction in their working capital since they will receive less in tax revenue. ...read more.

They are 'confident that new measures will create a valuable alternative for the expiring coordination centre regime and increase the attractiveness of Belgium for capital intensive companies, equity-funded headquarters and treasury centres.' 20 With the world heading for a deep recession and with many companies filing for bankruptcy, it seems that all countries will increase their investment in Belgium. This is because they will try and reduce spending at all costs and since the NITDS will allow a reduction on tax expenditure, with companies needing to invest in order to survive they may highly consider investing in Belgium since it may be the safest and most efficient option as shown in Appendix 8. According to a survey carried out by the daily De Tijd 21 many companies have expressed their enthusiasm about Belgium's latest tax cut for corporations. 22 With this innovative tax system, corporate tax rate is reduced to approximately 25%. For example Arcelor Steel Group will pay �31 million less in taxes due to the introduction of the NITDS. New investment will come into Belgium as Randstad 23 have shifted its headquarters into Belgium, both things happening this financial year. The government expects to miss out on �560 million; however Verhofstadt anticipates a broad recovery effect through increased economic activity. 10.2 - New Questions But it is important to understand, that even Belgium's innovative tax system has increased investments and has the potential to do so in the future, however will these increases be sustained? The Belgian government will have to ensure that they compete positively with fast developing economies, such as India and China. 10.3 - Limitations It is very difficult to draw conclusions at such an early stage but even with this in mind we can observe that the NITDS has benefited the Belgian economy. It is very difficult to collect concrete data as highlighted in the interview with Marcel Klaes, who said that 'the figures have a certain delay since the introduction of the NITDS was in 2006 we can see an increase but we cannot place that as the sole reason.' 11. ...read more.